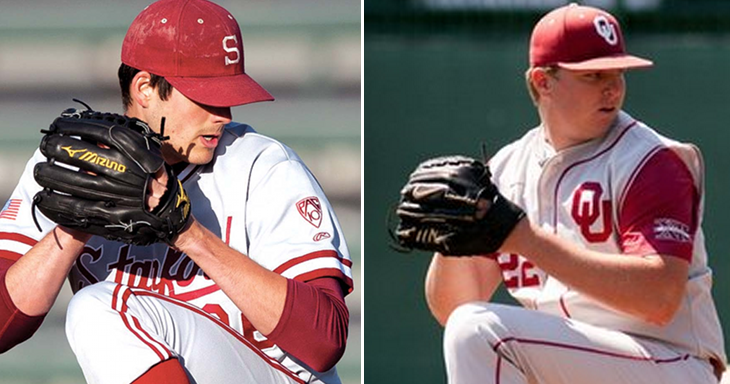 The NFL Draft is going on now (you cannot escape it), and the MLB Draft is about five weeks away. It won’t get the same national coverage, and it won’t have the same kind of immediate impact on the teams involved, but it’s going to be a very, very big deal for the Chicago Cubs. They pick second in the draft and, setting aside all of the other picks in the Draft, that’s the one one which the Cubs really can’t afford to whiff.

There are only a handful of players reasonable under consideration for the Cubs in that two slot, but with a dearth of advanced pitching talent in the system, and a couple of big-time college arms available at the top of the Draft, it’s always been a fair bet that the Cubs would be choosing from Stanford righty Mark Appel and Oklahoma righty Jonathan Gray. And, according to Gordon Wittenmyer, that’s exactly what the Cubs are going to do.

Wittenmyer reports that the Cubs have narrowed their choices at the two spot to Appel and Gray, with the intention of taking whichever is still on the board after the Astros select first overall. (Query which the Cubs would prefer if both are still on the board. That will be an interesting question over the coming weeks.)

He also notes that Dale Sveum confirmed for the media that he’s been watching film on the top 10 candidates for the Cubs’ pick, and indicated it would be hard to pass on Gray or Appel if they keep doing what they’re doing.

Patrick Mooney, in a similar piece, also reports that Gray and Appel have emerged at the top of the Cubs’ draft board.

Does any of that mean that the Cubs are absolutely locked into only those two pitchers no matter what? Obviously the answer is no. There are still five weeks to go before the Draft, and a number of things could happen in that space – most prominently, an injury. But it is conceivable that, barring any surprising changes, the Cubs very well could have decided that it’s going to be whichever of Appel or Gray is still on the board at number two.

College stats are only slightly more useful than high school stats, which are just a shade above useless, but each of Gray and Appel have been cruising this year. In nine starts, Appel has thrown 71.1 innings with a 1.54 ERA. He’s struck out 84 while walking just 12. He’s allowed 48 hits, and just one home run.

Gray’s numbers, as you’d expect them to be, are equally impressive, if not moreso. Through 10 starts, he’s thrown 74.1 innings and has a 1.09 ERA. He’s struck out 91, allowed just 13 walks and 40 hits, and has given up just one homer. The Pac12 is considered a slightly better baseball conference than the Big12, for whatever that’s worth.