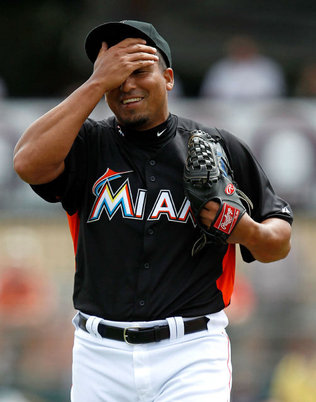 When Carlos Zambrano visited the Cubs a few weeks ago when the Rangers were in town, I was secretly disappointed that he wasn’t there to sign with the Cubs. That’s not because I think he can add value, necessarily, mind you, even considering the Cubs’ bullpen woes. I was disappointed because … man … the lulz. In a probably lost season, Zambrano would have added hours of entertainment.

It was not to be, however, as the visit was just a visit, and Zambrano continued to seek employment elsewhere. Well, according to Chris Cotillo (who is all over these kind of transactions), as well as minor league pitcher Jon Hunton and Gil Reyes (who appears to have had it first), Zambrano has agreed to pitch for the Long Island Ducks of the independent Atlantic League. The team already features former big leaguers Dontrelle Willis (who camped with the Cubs this year before being released) and Ramon Castro, among others. Vlad Guerrero is also reportedly going to be a Duck. So those could be some fun games to watch.

Zambrano, 31, has been looking for a job since the end of last season – an unsuccessful one with the Marlins. The Cubs traded him for Chris Volstad, also unsuccessful, before the 2012 season. He’ll try to dominate independent ball in the hopes that a midseason injury or five in the big leagues could open up a spot for him.

But it won’t be on the Cubs.