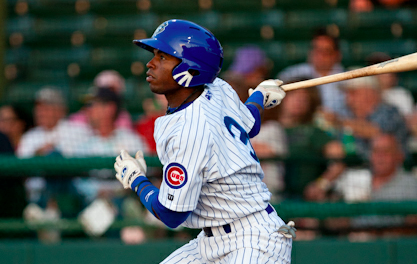 It looks like the Ian Stewart experiment is coming to an end. The often injured third baseman appears to be buried on the Iowa bench, and with Junior Lake likely to be assigned to Iowa when he eventually returns, that situation will not clear up any time soon. Scratch one third baseman off the depth chart.

But that does not mean that the Cubs need to panic and burn their first round pick in June on a third baseman. I had listed third base as one of the deeper positions in the farm system before the season started, and Stewart did not factor into that discussion at all. Between Lake, Vitters, Villanueva, Geiger, Bruno, Saunders, Carhart, Baez, and Candelario, the Cubs are not hurting for prospective third baseman at any level of the minors. Not of all of those guys will pan out (most won’t), but that is part of the point of having depth. The more quality prospects they pack into the system, the more major league players the system will produce (on average, anyway).

That’s not to say the Cubs should avoid third basemen in the draft, either. If the Cubs decided to play it a bit safe and take Kris Bryant with their first round pick, I won’t complain (particularly if they get him under slot and raise the average talent level of their draft as a result (even though I see Bryant as an outfielder in the majors more than a third baseman (many scouts would disagree with me on that))). If that is the direction the Cubs take, it will be the result of their belief that, when all the factors (including pitcher injury risk) are added together, Bryant is the best player on the board. The status of Ian Stewart and the bounty of hot corner depth in the farm system will likely never enter their minds.

Odds strongly favor the Cubs snagging one of the collegiate aces (Appel or Gray) over a bat with that second overall pick, but that will not be a reaction to the lack of pitching talent in the farm system either. With the second pick in the draft, any team will take the best player on their board. A lot of factors go into ranking players on that board, but the amount of talent at any given position in the farm system is flatly not one of them.

Once we get out of the first round, though, that calculus starts to change. I expect to see a lot of pitchers on the Cubs draft board between rounds 2 and 10, and that will be in no small part because they need to stock this system with arms. That thinking does not apply to the top of the first round, though. No matter what happens with Stewart, how much Baez struggles, how good Feldman looks, or anything else that may be going on, the Cubs will take the best player on their draft board. The only question is who that will be.

Iowa – Iowa swapped big innings with Colorado Springs, but it was the Cubs who came out on top 8-6.
Tennessee – Tennessee needed a good rebound game, and I think they got one. They scored three times in the bottom of the ninth to push it to extras, but ultimately lost in fourteen 12-11. As losses go, that’s a quality loss.
Daytona – Daytona kept this one close, but the end result was still a loss. The final was 6-5.
Kane County – Kane County was shut out 4-0.