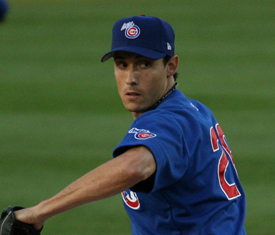 [Ed. – This is a guest post from BN’er Myles Phelps, a swell guy who writes about the Cubs from time to time (and you can find him on Twitter here). Myles wanted to share another idea with us, and it’s a hilarious list of random/obscure Cubs players. This is part three of the list, and here is part one and part two, in case you missed it. This is second humorous/informative list Myles has shared with us, the first being his collection of Cubs surprises and scandals.]

In case you missed it, a couple months ago I went through every single roster from when the Cubs became the Cubs until now. I picked out the most obscure players I could. What this basically means is that I chose the funniest names.

This took a long time … a very long time. I feel comfortable saying it took too long. I won’t say it was a waste of time, but I will say that I could’ve done so many more productive things with my life. I’ll name a couple:

1. I could’ve made a dinner that wasn’t cereal.

But I didn’t. I did this. I’m also truthfully really very sorry. It’s inevitable that your favorite Cub has ended up on this list … or will be shortly. I know there were some Sweetbread fans out there.

If you’ve been paying attention at all throughout this list of mine (and you really should, because I have some important stuff to say), you know that nicknames have been essential when I’ve picked these guys.

It seems that Ox was pretty strong. How strong you ask? Strong as an effing ox.

Again, no effort at all was needed in coming up with that. But it stuck apparently.

Ox didn’t play in the bigs for long. But he did deliver a lot of people’s mail in rural Texas after he was done playing. When’s the last time you saw an ox deliver mail? People in George West, Texas got to see it every day.

Oh, and George West, Texas isn’t actually in the western part of Texas all. Just so we’re clear. I know you were concerned.

He stepped on one once and his foot got infected.

It’s just so rich. Also that’s pretty embarrassing. Apparently the story is that he was fishing and he caught a catfish. While trying to get the hook out of its mouth, he laid the fish down and stepped on it somehow. If you’ve ever been fishing for catfish, you know that would hurt. But come on dude. You just caught a fish. Act like you’ve been there before. Also, where were your shoes? Everyone knows you don’t go fishing barefoot. But you did. And now here you are.

There are two interesting things about this guy. First, he doesn’t know how he got his nickname. He says he got it as a child and has no idea where it came from.

I want to know that story. I like to think that even at an early age, he was a lady’s man. So let’s just stick with that.

Second, he never hit a homerun when he was in the majors. I know he didn’t play much, but that’s still got to sting the ego. Poor guy.

[Ed. – I like his first and middle name, and it gave me at least two picture choices … ]

No nickname here. But look at that last name: Fanzone.

“You’ve stepped in the fan zone.”

How many times you think he said that? I like to think he’s really cocky and always says it. Every time he enters a room, that’s what he says. And when he’s at home, he plays a recording of a professional announcer saying it everytime he comes into a room at parties he hosts. Man, what a cocky son of a …

But really, he’s probably not that douchey. He could be though, I don’t know the guy.

Fanzone is also an accomplished flugelhorn player. Who knew? He played the Star Spangled Banner at Wrigley once, too. Before he started, he said, “you’ve stepped in the faaaaaan zoooooone.” What more do you need than a guy that has a first name of “Rocky” and a last name of “Cherry?” Nevermind the fact that he has career ERA of over 5. His freaking first name is Rocky. I don’t know how much more badass you can get.

Admittedly, Rocky was one of my favorite Cubs pitchers of all time based no criteria at all other than his name. Again, it’s not a nickname. His parents took the time to think of that name and then tell the person making his birth certificate. Then the guy making the certificate actually wrote down “Rocky.” Just awesome.

Then the Rocky theme music played.

[Ed. – Rocky Cherry, but no Buck Coats? They go together like Dirk Diggler and Reed Rothchild.]

Well, that’s it. There are SOOOO many more players that could’ve made it, but I only had room for 15. How did I do? Did you know these guys? I didn’t before this. But now I’m smart as hell and I’ll take you on in Cubs player Jeopardy.

I hope you enjoyed yourself. Feel free to let me know who I missed or why I’m wrong.