This Week In The Minors: Still Checking Up Skip to content 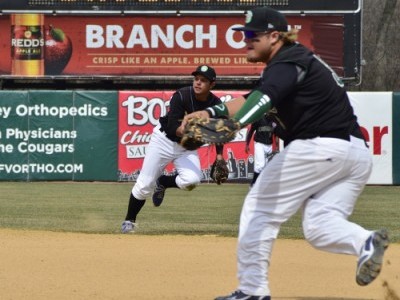 Last I week I checked in on the early season results from the Cubs’ ten best prospects. One of the nice things about the Cubs’ farm system, though, is that there are plenty of prospects to talk about beyond those at the top of the list. Today we survey a few highlights from the rest of the system. I won’t be running down the entirety of the Top 40, but nor will I limit myself to just those guys. You should not read these selections as any kind of a new top prospects list, either. That may come later, but today we’re just sampling the highlights across the breadth and depth of the system.

A system, I might add, that has been playing quite well lately. Three of the four teams are no worse than .500, and the fourth is Iowa. One day, Iowa fans, one day you will have a good team to watch. Really. It’s been awhile, but help is on the way. Eventually. That Smokies roster can’t stay in Tennessee forever.

Even though Iowa has by far the worst record in the farm system, they are not the farthest out of first. Their 6.5 game gap is closer than the deficit faced by Kane County. Nor is Iowa in last place. The Milwuakee affiliated Nashville Sounds are so horrifyingly bad that the owner of the Marlins is probably their biggest fan. It takes an amazingly bad team to trail the Cubs’ .385 winning percentage by a full four games, and that is exactly what Nashville is doing.

This is more like it. The Smokies have shrugged of their earlier struggles and back to playing some very good baseball. This latest hot streak has pushed them right back over .500 and left them comfortably in second place in the division. They have some work to do to catch Birmingham, but it is good to see Tennessee trending in the right direction.

The Cubs are holding at the .500 mark, but they are also riding another three game winning streak. They still have a better road record (12-8) than home record (8-12), and that is exactly the reverse of what we normally see. Hopefully that means this team is due for a long winning streak at home. Such streak, if it shows up, could propel the Cubs into first. They are currently just 3.5 out.

The Cougars are tied for fifth in the division, but they are just three games out of second. With Johnson and Maples leading what is suddenly becoming a very good looking rotation, the Cougars also look like they are in great position to make a run. It is a long way to first, though. There is a lot of talent on this team, and when that offense is hot they are hard to beat, but 7.5 games is a tough gap to close when Minnesota has dropped a loaded team of their own in the league.

Vogelbach is only slugging .423 this season, but other than that he his having a nice season. The walk rate is a solid 10.1%, the strike out rate is a very healthy 13.6%, and even though he hasn’t shown as much consistent power I thought he would so far, he does have five home runs. And make no mistake, that power will show up. Hitting the ball very hard is not likely to ever be one of Vogelbach’s problems.

Taking care of business on defense, on the other hand, is going to be a problem. Vogelbach projects to be adequate at best with the glove, and that means he will give up some total value on defense that he will have to make back with his bat. To reach Wrigley he not only has to hit well enough to become a major league first baseman (and that alone is a tall order), he has to hit well enough to offset the value he will not bring on defense.  That is a lot of hitting, even for someone with a bat that projects as well as Vogelbach’s.

In many ways, Hernandez is the exact opposite of Vogelbach. The glove will likely be Hernandez’s calling card as he moves up the system, not the bat. Even so, this switch hitter needs to hit enough to keep himself in the lineup. So far this season he has done exactly that. He isn’t setting the league on fire by any means, but he has started to play fairly well lately after a slow start. The walk rate (2.5%) is concerningly low, but for the time being we can make allowances for a slow start.

Alcantara is definitely not off to a slow start. He already has 4 HR and 13 SB and is on pace for career highs in both categories while facing the best pitching of his life. That’s good. He has also jumped his walk rate to 7.6%. That’s better. And while his line may only read .245/.310/.364 for now, that comes with a BABIP that is well below his career norm. It is likely that Alcantara has actually been better than he looks on paper.

The Smokies have been playing him at second base from time to time, and that is an intriguing slot for this switch hitter. Even if his BA and OBP ultimately resemble those of Darwin Barney in the majors, Alcantara will bring power and speed that Barney just doesn’t have. If the Cubs don’t make a move, the battle for second base could be red hot by the end of next spring.

And we have to keep Logan Watkins in that conversation as well. Watkins has slumped to a worrisome batting average of .229, but thanks to his phenomenal 17.9% walk rate his OBP remains a very solid .377. Combine that with some surprising left handed power, and Watkins is still a productive part of the lineup even while in the middle of a slump. His glove work is quite good as well.

The best news, though, is that the Cubs have been moving Watkins around the diamond. While his best position remains second, he has also seen time at short and in center. Watkins can handle all three. A patient, high OBP left handed hitter with a little power, good speed, and a solid glove who can play all over the diamond is probably on a lot of big league managers’ Christmas lists. Sveum must be on the Nice List; Watkins should be on his bench (if not starting at second) next season.

Anyone want a 14.46 K/9 and a 1.11 FIP coming out of the bullpen? Thanks to injuries Rosscup has flown under the radar in the Cubs organization since he arrived as part of the Garza trade, but he has now emerged as quite possibly the best reliever in Tennessee. Given that the Tennessee pen features Tony Zych, Trey McNutt, Frank Batista, and Brian Schlitter (among others), that is a remarkable emergence. I doubt the Cubs will rush Rosscup, but I doubt they take their time either. I think this southpaw will get a taste of Iowa by season’s end.

Another recent trade guy having a breakout season for the Smokies, Kyle Hendricks is going to force his way onto a lot of organizational top prospect lists if he keeps this up. I can quibble with his 7.05 K/9, but that’s about it. He keeps the ball in the ball park, avoids walks well, gets ground balls, and has put up an ERA of 2.82. That’s enough to put him squarely on our radar.

And we’ll wrap this up with Andreoli. This speedy outfielder stole 55 bases for Daytona last season, but, thanks in no small part to the logjam of outfielders in Iowa, he is still sitting in Daytona to open 2013. His .402 OBP is exactly where he left off last season, but he’s raised his SLG notably (to .403) at the cost of a bump in K%. He has also been hitting more in the middle of the order this season, and as a result is on pace to set career highs in both R and RBI.

To be honest, Andreoli is simply in a holding pattern. As soon as the Cubs find room to move outfielders like Jae-Hoon Ha and Matt Szczur to Iowa, Andreoli and Jorge Soler are likely to make the trip to eastern Tennessee. That move (especially in the case of Andreoli) could come anytime in the next six weeks or so. When he gets to Tennessee we’ll start to learn just what sort of a future he might have.