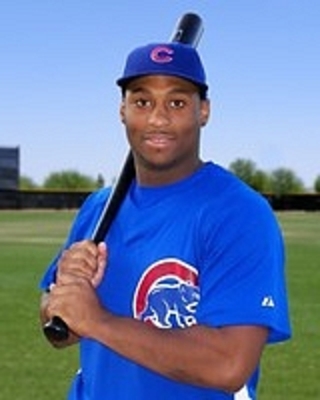 Reggie Golden has been added to the Kane County roster and made his season debut last night. The stat line (0 for 3, 2K, 1BB) is almost beside the point. The important part is that Golden is back in action.

The Cubs took Golden in the second round in 2010, but he only appeared in four games that summer. In 2011 he made it into 64 games with the short season Boise team; that remains his high water mark. Thanks to a season-ending injury, he played in only seven games for Peoria last fall. We are coming up on the third anniversary of his being drafted and he just now played his 76th professional game. That’s not a great way to start a career.

Golden is a potential five tool outfielder who could, once he gets some regular experience, shoot up the Cubs prospect rankings in a hurry. In terms of talent he trails only Almora and Soler among outfield prospects in the organization. He has organizational Top 10 potential, even in this organization. If he can stay healthy.

If he can, Kane County fans will get to enjoy the best outfield tandem in the farm system (at least for now). If you did not already have enough reasons to watch this team play, now you have one more.

Iowa – The Cubs had a chance to take the lead in the 9th, but they couldn’t get it done. They lost 4-3.
Tennessee – Tennessee had a decent game, but Birmingham played a better one. The Smokies lost 6-3.
Daytona – Two Cub pitchers combined on a shutout in this 3-0 win.
Kane County – It took nine innings for the Cougars to get on the board, but it wasn’t enough. They lost 2-1.