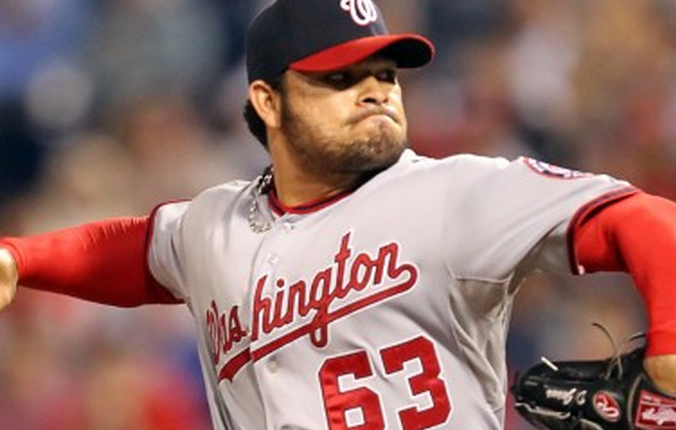 Today, the Chicago Cubs picked up reliever Henry Rodriguez in trade from the Washington Nationals in exchange for minor league pitcher Ian Dickson. I’d mentioned Rodriguez back when he was designated for assignment, and said he was pretty much exactly the type of pitcher the front office likes to take a chance on right now:

Nationals reliever Henry Rodrigez has been DFA’d and will be placed on waivers, which could pique the Cubs’ interest, given their penchant for grabbing and stashing arms. The 26-year-old righty has a huge arm – his fastball is regularly in the upper 90s, and frequently tops 100 – but has been plagued by control issues in recent years. He’s walked more than 6 per 9 each of the last three seasons. If you could harness that arm, there’s a ton of raw talent.

All of that remains true. Even in his “good” 2011 season, Rodriguez was walking 6.2 per 9, which he mitigated slightly by striking out 9.6 per 9. That might be his upside, though, as a poor-man’s Carlos Marmol (the good Carlos Marmol, circa 2007 to 2010), who gets himself into and out of trouble with his raw ability.

That said, in the last two years, he’s been frightfully bad for the Nationals – so much so that they were willing to let the 26-year-old go, despite his obvious natural ability. It’s a nice upside play for the Cubs, who’ve got nothing but time for a guy like Rodriguez. Get him in the organization, work on his form, and see what happens. You can’t teach 100 mph, so let’s see what happens. Rodriguez could immediately move into the bullpen if Zach Putnam has to go on the DL with an arm injury, or he could try to work things out at AAA.

The fact that the Cubs had to make a trade for Rodriguez suggests that there was at least a touch of interest by other teams in picking him up off of waivers, even if the price tag in trade wasn’t very steep.

Dickson, 22, was a mid-round pick in the 2011 Draft, and had been pitching with mixed results at low-A Kane County. He isn’t a complete non-prospect, but he’s right there on the border.

To make room on the 40-man roster for Rodriguez, the Cubs designated reliever Eduardo Sanchez for assignment. Sanchez, another upside reliever whom the Cubs had plucked off of the waiver wire from the Cardinals, got a couple weeks to show what he had at AAA Iowa. Either the Cubs didn’t like what they saw, or believe they can get him through waivers and stash him at AAA. Hopefully it’s the latter, because he’s a guy that would be nice to keep in the organization.