Bullpen Shuffle: Zach Putnam to DL, Brooks Raley Called Up; Rodriguez Due Later in the Week Skip to content 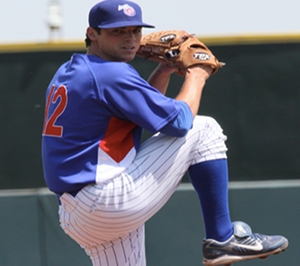 Reliever Zach Putnam, who was finally getting a shot with the big club after dominating at AAA Iowa, is off to the MRI fairy after feeling discomfort in his elbow last night. He’s battled bone spurs before, so, while the injury might not be devestatingly bad, it’s presumed to be bad enough that the Cubs have already put him on the disabled list.

In his spot, the Cubs have called up lefty Brooks Raley, who has been starting at Iowa to mixed results. The 24-year-old got a handful of starts with the big league team last year, but he’ll be pitching in relief this time around (if he sees action at all). In reality, Raley got the call primarily because he’s already on the 40-man roster and can be freely shuffled like this.

Why not newly-acquired Henry Rodriguez? Sounds like there’s a little delay in his actual arrival to the Cubs – he’s not expected to be available until around Friday. So, for today and tomorrow, the Cubs needed an arm, and Raley is the guy.