Father's Day, Baseball, and Other Bullets Skip to content 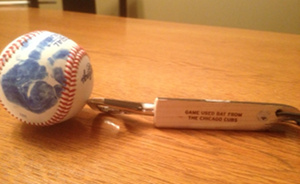 Because my dad passed away when I was 11, Father’s Day didn’t have a lot of meaning for me for most of my life. At best, it was an anonymous Sunday on the calendar of which I was made aware only by reading the rash of “Happy Father’s Day” messages that morning around the web. At worst, it was a day that made me very sad. But, thanks to the arrival of The Little Girl in early 2011 – and now The Little Boy in early 2013 – Father’s Day has re-entered my life, and I couldn’t be happier. I don’t need my fatherhood to be celebrated or applauded, but being a dad to these kids is as awesome as everyone always said parenthood could be. Whether today is supposed to be about me, I don’t much care. Because it’s actually about them. They make me very happy every day, and hearing The Little Girl say, “Happy Father’s Day, Daddy” is the icing that makes today special.

The kids also gave me a baseball with their hand prints on it, and The Wife gave me a bottle opener made from a game-used Chicago Cubs bat. So, yeah, today’s already been pretty awesome.