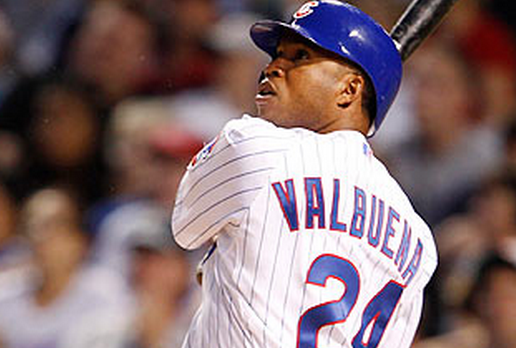 It might be time to start talking about Luis Valbuena as the Chicago Cubs’ third baseman for 2014.

Sure, if you look at the upper levels of the minors, it was always a strong possibility that Valbuena would fall backwards into repeating at the Cubs’ primary third baseman in 2014. But what I’m talking about is Valbuena, like, affirmatively earning the job. And us being excited about it.

While his history before coming to the Cubs off of the scrap heap was relatively nondescript, there was a time when he was a top 20 prospect in the Mariners’ system, and then a modestly well-regarded young player with the Indians. He never quite emerged as a regular with the Indians, and the Cubs claimed him at the start of the 2012 season. He filled in reasonably well in the second half last year, but was still expected to play behind Ian Stewart this year. When Stewart was hurt and ineffective to begin the year, Valbuena grabbed the reins – in a platoon – and he hasn’t let go.

While his OPS – .766 – has slipped in the last month, it remains above average (109 OPS+). Better, his .355 OBP would be tied for 24th in the NL if he had enough plate appearances to qualify. His 4.28 pitches per plate appearance would be tied for second in the NL. He doesn’t strike out, and he takes walks. He has emerged as a fantastic leadoff option for the Cubs in the absence of David DeJesus. Moreover, he’s playing such good defense at third base that FanGraphs has him well above average there both this and last year.

Valbuena has already accumulated 1.7 WAR, which puts him on pace to be a 3.7 WAR player by the end of the year. That kind of calculation is necessarily imperfect, but the result is striking. Know how many third basemen in baseball had a WAR better than 3.7 last year? A whopping seven (Wright, Headley, Cabrera, Beltre, Ramirez, Zimmerman, Freese). That’s it.

Valbuena makes $930,000 this year, his first in arbitration. As a Super Two, he’s got three arbitration years left, and the Cubs have him under control through 2016. At just 27, it’s not unreasonable to think that Valbuena could actually be the Cubs’ starting third baseman for a healthy portion of those three years, depending on how various prospects shake out.

Sure, some of this might be a small-sample mirage. But the defense strikes me as legit. The plate approach is legit. The contract value is legit. All of the indicators look good, too: his walk rate is up, his K rate is down, his ISO is up, his BABIP isn’t even close to unsustainably high (in fact, it will probably regress in the positive direction).

The simple fact is, no matter how much our gut tells us to rebel, dreaming on Valbuena as a quality third base option for 2014, albeit probably in a platoon, is no longer crazy. It’s … legit.

Most importantly, Valbuena as the Cubs’ regular third baseman for the foreseeable future guarantees that we’ll get much more of the most gloriously superfluous bat flip in baseball history: