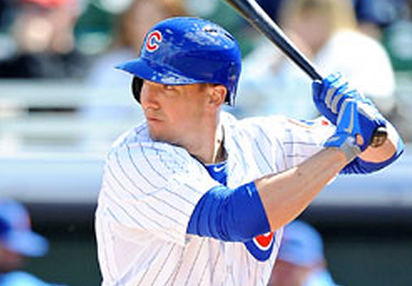 With Carlos Marmol being designated for assignment and the Cubs preferring to return to a more normal bench-bullpen ratio, outfielder Brian Bogusevic has been added to the 40-man roster and called up from AAA Iowa. I mentioned it in the Marmol/Stewart piece, but Bogusevic deserves his own discussion.

Bogusevic joins the bench after doing everything a guy can do in AAA to get a call-up. Although 29 and not a threat to become a regular right now, Bogusevic is probably a bit better than your average 29-year-old AAA roster filler. For one thing, he’s already had a few years’ experience in the bigs (some of which was pretty solid). For another, he can play all over the outfield, and the expectations are limited to “fill in adequately on defense, and hit righties occasionally.” Moreover, Bogusevic is a converted pitcher, who didn’t take to the field permanently until 2009.

It’ll be interesting to see how he’s used. With David DeJesus on the disabled list with a shoulder strain, a lefty outfielder who can play all over makes sense for the call-up, though the composition of the rest of the outfield will make it hard for Bogusevic to see starts. The Cubs already have lefties Julio Borbon and Ryan Sweeney, making the team deep in part-timers who bat lefty and can play all over the outfield.

Sweeney, for his part, has pretty much locked down the starting center field job in DeJesus’s absence. Bogusevic won’t fill in for Nate Schierholtz against righties, because obviously, but he might spell Alfonso Soriano from time to time. If Soriano were to be dealt at some point over the next month, Bogusevic would obviously see a greater opportunity. The Cubs would probably like to see him play regularly in the second half of the season just to see what he’s got.