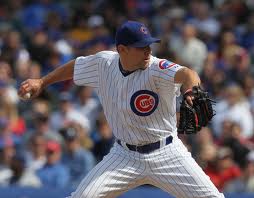 Well, the Chicago Cubs finally decided that they’d seen enough from Shawn Camp, not unlike they had with Carlos Marmol. A year after being the team’s MVP, according to Dale Sveum, the Cubs today designated Camp for assignment to make room for an influx of new relievers, including recently acquired Pedro Strop and Matt Guerrier, who should be joining the team tonight. The Cubs also optioned Chris Rusin – yesterday’s Scott Feldman fill-in – back to Iowa.

Camp struggled mightily this year, dealing with ineffectiveness and injury. The 37-year-old has an ERA over 7 and a WHIP of 1.870. His walks were up, his Ks were down, and he just never seemed to get his footing a year after leading the league with 80 appearances.

The Cubs now have 10 days to trade, waive, or release Camp. A trade is inconceivable – maybe even more than the inconceivable Marmol trade, but the front office found a way – so I’m thinking it’s waivers. Camp has a $1.35 million contract this year, which isn’t much, but I’m not sure a team is going to want to put him on the 40-man roster immediately. Instead, I expect he’ll clear waivers, and then may elect free agency, hoping to latch onto another organization and work his way back.