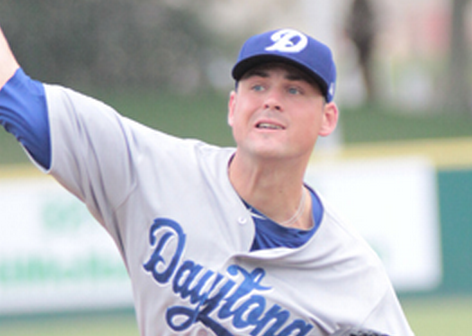 Before I get into the prospect ranking stuff, the Daytona Cubs have added a no-hitter to their franchise history. Right hander Matt Loosen walked two on his way to no hitting the Dunedin Blue Jays. That’s awesome.

More on that in a bit. But first…

Two articles recently published on Baseball America are each well worth reading individually, but when read together they provide a very powerful endorsement of the Cubs farm system, front office, and future.

Start with this one. That wonderful, wonderful article is Baseball America’s midseason update to their Top 50 Prospects Lists. Number ten is Baez. Number sixteen is Almora. Number eighteen is Soler.

Now let me rephrase that slightly. Despite a near historically bad start to the season, Baez recovered and performed so well that he made it up to No. 10 on the list. Almora had surgery to remove a bone from his hand this spring, but since then has performed so well that he has soared all the way up to No. 16 despite not having any one standout tool. Soler, we found out after he went on the DL, had been battling a leg issue since the spring and he still showed enough to check in at No. 18. That’s impressive.

We’re not done yet.

The second article to read is this one. Every year a reader asks BA’s Jim Callis which draft picks from that year’s draft will immediately become the best prospect for their new team as soon as they sign. Callis only sees two 2013 draftees in that category, and…

This year, I see only two draftees who project to become their organization’s top prospect, and one of those is highly debatable. Third baseman/outfielder Kris Bryant (No. 2) had the best power in this year’s draft, and though it’s an extremely close call, I’d take him over shortstop Javier Baez and outfielders Albert Almora and Jorge Soler in the Cubs system.

That means the Cubs will have two Top 10 caliber talents in the organization as soon as Bryant signs. And they have four guys in the conversation for Top 20.

When we consider the Cubs prospects in contention for Top 100 status (Vogelbach, Alcantara, Johnson, Paniagua, Vizcaino) as well as the expected return from a Garza trade, it starts to look very likely that the Cubs could have as many as six or seven on the off season Top 100 lists highlighted by The Big 4.

How’s that for a great start to the day?  Cubs beat the White Sox, massive praise for the farm system, and we have a no hitter to talk about.

Iowa – Four in the third proved to be enough as Iowa won 5-2.
Tennessee – The Smokies gave up five runs in the late innings and lost 6-3.
Daytona – This was a beautiful game. The Cubs scored early and Loosen was nearly pristine. The Cubs won 7-0.
Kane County – The Cougars were rained out.
Boise – The Hawks took advantage of five errors and steamrolled to an 11-3 win.
Arizona – The AZL Cubs had the night off.