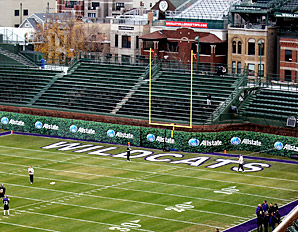 Although it could simply be a product of the ever-expanding reach of the Internet, I feel like the Chicago Cubs have been more aggressive in signing undrafted free agents over the last two years. Outside of the Internet explanation, I suppose I’d attribute it to the shrunken Draft (down from 50 to 40 rounds in the last two years), and the new front office. I really hope they eventually hit on one of the undrafted guys they’ve signed, because it tends to make for a hell of a nice story.

The latest is a local product, Northwestern shortstop Trevor Stevens. The senior started every game at shortstop for Northwestern, although he’s able to play all over. Stevens was twice an All-Big Ten shortstop.

His size – he’s listed by Northwestern at 5′ 9″ and 175 lbs – probably played a large part in his not being drafted, but his offensive performance as a shortstop was solid. He hit .267/.355/.337 on the year with 24 walks and 36 strikeouts. He stole 19 bases and was caught just 4 times, so I’m getting the picture of a speedy leadoff type who plays good defense (based solely on his size, line, and the fact that the Cubs signed him, I mean).

Stevens missed the 2012 season with an injury, which probably also affected his visibility for draft purposes.

Like the undrafted signees before him, the odds are strong that Stevens does not become a regular at the upper levels of the Cubs’ minor league system, let alone with the big team. But that’s true of most of the players the Cubs draft, too. This is all a part of the process of stocking and re-stocking your farm system with a wide variety of talents.

And, yeah, the picture is from when Northwestern played football at Wrigley. They played baseball there this year, too (including with Stevens). The Cubs have a close relationship with Northwestern, so it’s likely that they know Stevens well.