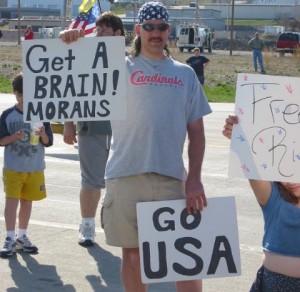 I am mighty tired this morning. Dear Cubs, Please don’t trade Matt Garza in the next eight or so hours.

St. Louis Cardinal fans are acknowledged throughout baseball as knowledgeable, sophisticated and baseball-savvy. It is a reputation well-deserved and appreciated by ballplayers and managers who covet the weekend series in St. Louis where sell-out crowds enthusiastically cheer good plays by both teams.

But if St. Louis is the Mensa Society of the baseball university, then Cub fans are still using coloring books. They enthusiastically boo an intentional walk in a game situation, cheer for fans to throw an opposing team’s home run ball back onto the field and delight in mocking their team’s efforts when they lose and exaggerate the significance when they win.