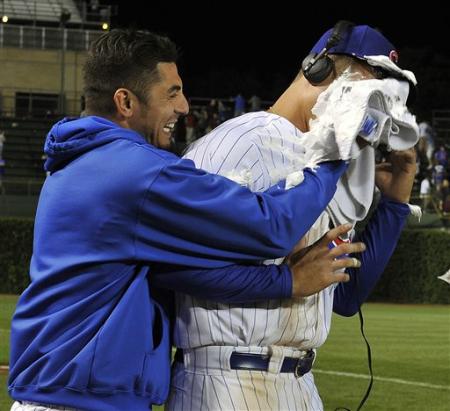 In 2012, I got out to my first game at Wrigley Field in early April. It was Matt Garza’s second start of the year, and it came against the Brewers and Zack Greinke. The Cubs’ bats slapped Greinke silly, staking Garza to a huge lead. I had a really good time.

By the time the 9th rolled around, Garza was working on a shutout. With two outs, and a grounder right back two him, all he had to do to complete the shutout was toss the ball gently to first.

But you know what happened …

Because the Cubs went on to win 8-0, even after Garza was subsequently pulled, and because I’d like to think that Garza takes the memory in stride, I can’t help but smile when I see that GIF. Over and over and over.

And, yeah, that includes his struggles in making the simple throw to first base. Because even those memories are now fond ones.

May Garza pitch well for the Rangers this year, and may his throws on comebackers always reach the first baseman.

The Blackhawks Need To Start Scoring Goals, Whatever Way Possible

This Week Could Be Matt Nagy’s Last With the Chicago Bears, But You Know How That Dance Goes