A BN Blogathon Fundraiser Update, and What Your Donations Are Helping Support Skip to content 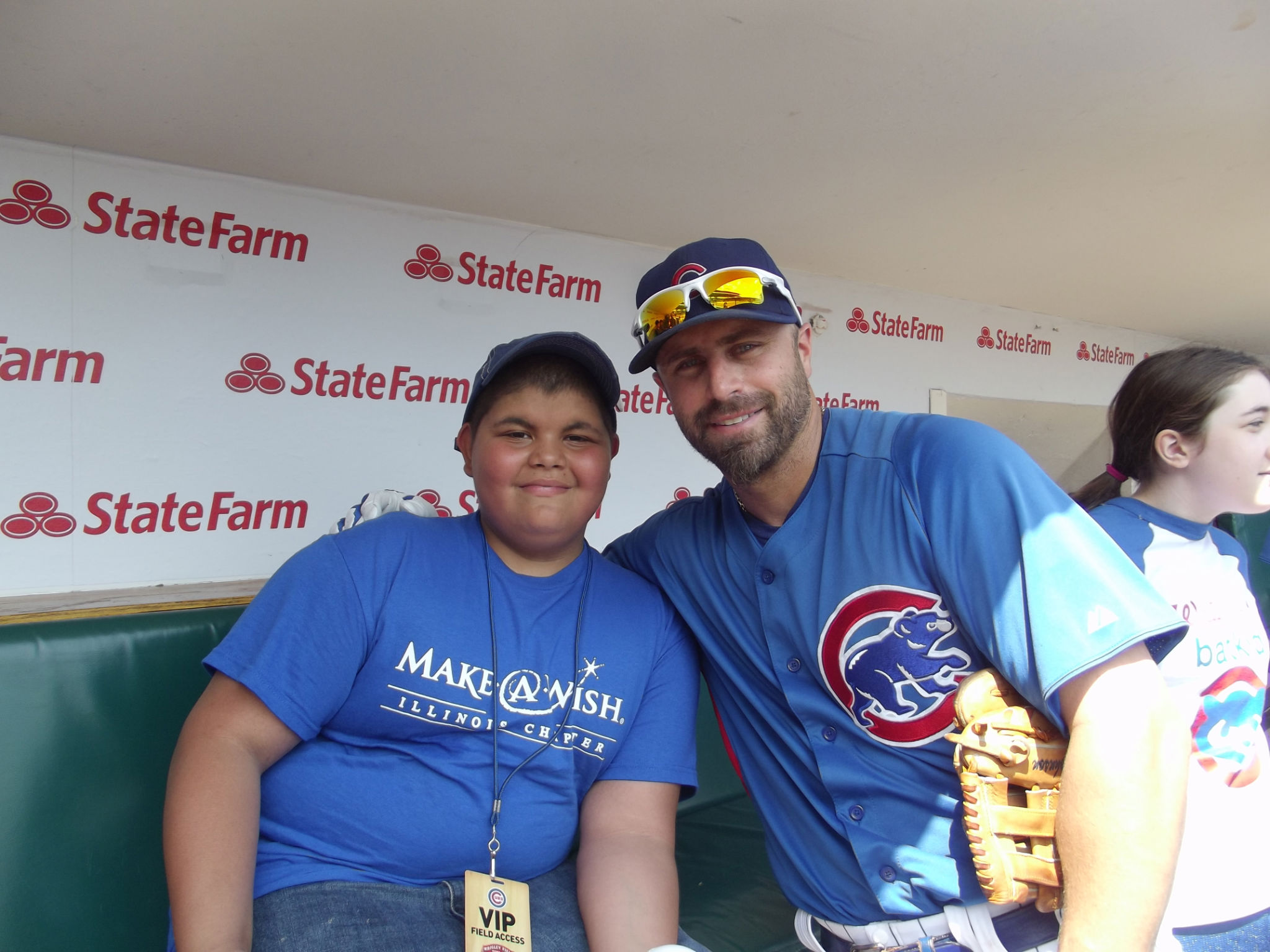 Thanks to your overwhelming support of the BN Blogathon, we have – so far – raised $9,425 for Make-A-Wish in their continued effort to grant the wishes of children with life-threatening medical conditions to enrich the human experience with hope, strength and joy.

As you know, Make-A-Wish grants many wishes to young Chicago Cubs fans who wish for a Cubs experience, and it is our intention to help fund those wishes. Make-A-Wish was kind enough to pass along the story of just such a wish recipient, who last year had a very special time at Wrigley Field:

Arturo, also known as AJ by his family, is an upbeat and outgoing twelve-year-old boy who lives with his parents and older sister in Galesburg, IL. AJ loves baseball and football, and uses to play before he got sick. When he can’t participate in his favorite sports, he enjoys watching them on TV. His favorite teams are the Chicago Cubs and Chicago Bears. It is fitting then that AJ told Make-A-Wish that his two favorite colors are ‘Cubs blue or Bears Blue’. AJ is also a big animal-lover, and takes very good care of his two guinea pigs: Cocoa and Buddy.

In December of 2011, AJ was diagnosed with a Burkitt’s lymphoma, a cancer of the lymphatic system. AJ had to undergo chemotherapy, and was disappointed when he lost his hair. Despite his struggles, AJ knows that he always has his family to lean on for love and support.

When asked to reveal his most heartfelt wish, AJ wished to go to a Chicago Cubs game and meet some of his favorite players: Alfonso Soriano, Starlin Castro and Reed Johnson. On the morning of his wish, AJ and his family were picked up by limo and taken to the Hampton Inn & Suites in Chicago. AJ could barely sleep; he was so excited for the next three days when he would watch the Cubs play against the St. Louis Cardinals. AJ, wearing his favorite Cubs hat, was escorted onto Wrigley Field where he and his family were able to take photos. Then AJ was presented with a baseball bat and ball which he could use to collect signatures from all his favorite players. AJ had a front row seat in the dugout where he watched the game, shook hands with players, and got autographs! He also witnessed the Cubs win the series over the Cardinals 2-1! AJ’s family was thrilled to see Arturo smile like his old self while at the Cubs game. Thank you for helping to make wishes like Arturo’s Cubs wish come true!

I can’t tell you all how incredible it is that you, the BN community, are helping make wishes like that happen because of your generosity.

But we’re not done yet! Although I’m already on the hook for 34 hours of blogging at the Trade Deadline next week – no sleep, no breaks, just coverage and fun – you can still get two more hours out of me if we get up to $12,000 in donations by Tuesday, July 30. As you can see by Arturo’s story, this is a great cause that makes a real impact in young peoples’ lives.

Please consider donating to Make-A-Wish and spreading the word about our fundraiser. For more on the Blogathon, see here. To donate, go here.