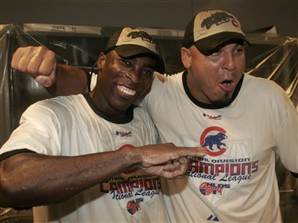 [From our friend, Sahadev Sharma.]

The following isn’t about Alfonso Soriano’s career with the Cubs on the field. I’m not trying to break down his value and determine if he was worth the huge contract the Cubs gave him nearly seven years ago. My thoughts on Soriano’s performance remain completely separate from my thoughts on him as a person (as they do with any player). I haven’t covered the game for very long, but I’ve met plenty of players who seemed like good guys. However, Soriano has been with the Cubs since the first moment I walked into their clubhouse; he was the first player I came across who showed me on a daily basis what it meant to be a consummate professional and define the word class. This is my farewell to a player I truly enjoyed covering.

My first experience in a clubhouse was spent trying to get a sound bite from Milton Bradley. Bradley hadn’t talked to the media in nearly two weeks and on this night, nothing would change. He knew he was the story (it was his first start at Wrigley Field as a Cub), but he was nowhere to be found prior to the game. After the game, Bradley somehow slipped past the media once again. He clearly had no desire to talk about his 0-for-4 outing or his ejection and subsequent one-game suspension that occurred a week earlier. I left that evening with no quotes from Bradley.

But I wasn’t mad about it. I still never begrudge a player for leaving early or avoiding the media when it’s obvious that said player is the story of the night. I get it; some player’s aren’t big fans of the media. They don’t feel like they’re always treated fairly by us and some probably believe we serve no useful function. I wholeheartedly disagree with the latter, and while I feel I’ve avoided the former in my young career, I can see where they’re coming from.

The fact is, these guys don’t have to talk to us. And if they don’t, I’m not going to rip them. But when someone is repeatedly accountable – whether they’re playing well or not, whether the team is winning or on its way to 100 losses – they deserve to be commended.

Alfonso Soriano is that guy.

It’s likely that Soriano wasn’t always treated fairly by the media or fans, but he always addressed whatever questions were posed with honesty. Sometimes his frank responses would be received in a negative fashion (like when he would express his preference to hit at the top of the order), but at least he was there, allowing us as members of the media to do our job.

Last season, when trade rumors followed him for much of July, Soriano would bring one of his sons with him to batting practice, toss the youngster a couple balls behind the cage and I’d watch with a smile while a father taught his child to play the game he clearly loves so much. After those games, Soriano would answer our numerous questions about trade rumors with surprising honesty (as he did once again this year). Sometimes the answers were head-scratchers (is San Francisco’s weather really that much worse than what he faced on the North Side all these years?), but Soriano often has an interesting take on things.

Soriano isn’t trying to play some character in front of the cameras. When he didn’t want to get traded to a certain team, he not only let Theo and company know, but he shared those reasons with the media as well. No matter how bizarre those reasons may have seemed, they were his reasons and he’d earned the right to turn down a trade and do what he felt was best for himself and his family.

Soriano was always willing to talk when I, or any other member of the media, stuck a mic in his face. Whether he’d delivered a game-winning hit, gone 0-fer or just been the only person any of us could think of to get a quote from, Sori was there. And if he wasn’t, it likely meant he was getting in a workout or looking at tape.

Soriano also provided the material for one of my favorite postgame write-ups. Not only did I unearth that Soriano hadn’t been coached on outfield defense until 2012 in that piece (I still can’t believe that, the man freaking changed positions weeks before the 2006 season and the only coaching he got was to go shag some balls in the outfield), but Soriano also admitted that the only reason he set a career high in RBI that season was due to hitting lower in the order. That’s basically the perfect quote from a ball player for a stat-nerd like myself.

This piece isn’t meant to say that Soriano is perfect. He undoubtedly has his warts. I particularly didn’t love the way he handled his displeasure with often batting seventh in 2011 (I may not have approved of his approach in this situation, but, once again, he was just being honest). But watching Soriano’s transformation from fan and media whipping boy to team leader and go-to guy for a postgame sound bite has been fascinating. In fact, I’ve realized that Soriano’s Cubs career has been an interesting contrast to another polarizing former-Cub: Sammy Sosa.

Sosa was the darling of fans and media for much of the late-90s and early 2000s. During that time, the image portrayed of Sosa, by both the media and the team, likely wasn’t the most accurate. As we all know, Sosa eventually wore out his welcome with multiple headline-grabbing controversies (corked bat, smashed stereo, etc.) and after one final, and memorable, episode to end the 2004 season, Sosa was traded to Baltimore.

As I detail in a Baseball Prospectus piece (with glowing quotes from Bob Brenly, often one of Soriano’s biggest critics in the past) I wrote last year, Soriano’s Cubs career arc is quite the opposite. So much so, that when Kerry Wood mentioned that Sosa should return to the Cubs family as an ambassador of sorts, I actually thought of someone who would be better for that job once his playing days were over: Soriano.

Soriano’s work ethic, accountability and quiet, business-like approach to the daily grind are attributes that all young players should aspire to develop. He’s proven to be a leader, not by being loud in the clubhouse or standing on the top step of the dugout cheering his teammates on. Those things have value in their own way, but Soriano’s ability to lead by example is something that every young player needs to witness.

It may seem odd, but Soriano has 889 games played with the Cubs. That’s 388 more games played than with the Yankees, so unless he signs on for more than the 2014 season with New York, he’ll end his baseball career with the Cubs as his most tenured team.

Having Soriano share his experiences with the Cubs’ future in the coming years would be an invaluable asset. Soriano’s faced the pressure of the New York media as a much-hyped prospect. He’s signed the big money deal with the Cubs and dealt with the expectations of trying to carry a snake-bitten franchise to a championship. He’s faced extreme criticism through the years and handled it all with aplomb.

Soriano’s been on quite the journey in his baseball career – going from the Dominican Republic, to Japan, to New York, to Texas, to D.C., to Chicago and now back to New York – and it just seems obvious that sharing those experiences would be invaluable to Cubs prospects, many of whom are not only experiencing professional baseball for the first time, but life in this country for the first time, as well.

I realize I’m just a novice in this business. In all likelihood, the veteran beat writers with whom I work alongside could rattle off plenty of players who they’d put ahead of Soriano on their ‘good-guy’ list. I’d love to have a long career and get to know many ball players in the coming years. And sometime down the road, when my life in baseball is over, I’ll have my own list. Soriano may not be at the top, but he’ll always be the first guy I covered who’s on it. In fact, one of the lasting images I’ll have of my early career will like be Soriano’s beaming smile, something that he seemingly had plastered on his face more often than not.

It truly was a pleasure to cover #SoriTime.