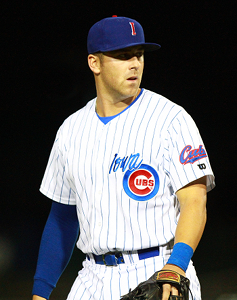 Playing off a topic Brett brought up yesterday, why are major league games stretching on so long? Brett and I are in complete agreement regarding the importance of attracting new fans to the game and how longer routine game times can make that task more difficult. Three hours is on the long side for an average game; three and a half hours for nine innings is ridiculous.

So what is the problem? I generally tended to blame the TV contracts and the insertion of a commercial every time play stops at all, but after looking over some game times from the minors this weekend I am no long sure that is the primary cause.

Not all leagues report game times, but here are the times for Friday, Saturday, and Sunday games played by Iowa and Tennessee: 2:59, 2:44, 3:27, 2:19, 2:53, 2:43. Those time are a fair bit higher than I was expecting given the lack of media contracts in the minors. Maybe TV does not have as much to do with it as I had thought.

Sample sizes are too small here to draw definitive conclusions, but there are no clear trends from studying these six games. Iowa’s 3:27 saw each team use four pitchers, but so did Tennessee’s 2:53. Somehow the Smokies still wrapped things up 34 minutes faster. There are no obvious correlations with number of walks, either. In broad terms the better pitched (and less offense heavy) games moved more quickly, but that is not really surprising. Nor does it tell us why games just seem to keep getting longer as baseball advances through eras.

I don’t know what the answer here is. Like Brett, though, I am surprised that the Commissioner’s office does not appear to be taking a more visible interest in the issue. Regardless of your opinion of this Commissioner, when Selig focuses on something things tend to happen (good or bad). He was embarrassed by a tied All-Star Game and immediately reformed it. He was called out by Congress over PEDs and now baseball has one of the stiffest and most aggressively enforced drug policies in professional sports. He wanted to address competitive balance and the runaway spending on amateur talent and in the span of a single CBA pushed through more changes to the draft and international free agency than had occurred collectively in many years. If Selig would turn his attention to game times, I honestly think something would get done. It might even be the right thing.

A game clock should never be apart of the game of baseball, but that does not mean that less radical tweaks cannot be found that will speed things up a bit.

Iowa –
Friday – Iowa kept this one close, but lost in the ninth 5-4.
Saturday – They fell in a shutout on Saturday, 5-0.
Sunday – But on Sunday Iowa finally broke through with a win. The final in this one was 8-4.

Tennessee –
Friday – The Smokies had plenty of hits, but no runs. They lost 1-0.
Saturday – A ninth inning rally fell short as they lost again on Saturday 4-3.
Sunday – Tennessee went winless for the weekend as they fell 10-4.

Daytona –
Friday – The Cubs exploded for seven runs in the fourth inning as they won 9-7.
Saturday – Part of playing in Florida is rain. This game was a victim to that.
Sunday – And so was this one.

Kane County –
Friday – This game did not go well for the Cougars. They lost 7-4.
Saturday – A pair of three run innings carried the Cougars to a 6-1 win.
Sunday – They were blown out in this one, though, losing 11-1.

Boise –
Friday – A rainout on Friday…
Saturday – …set up the doubleheader on Saturday. The Hawks took Game One 4-0, but dropped the second contest 3-1.
Sunday – Boise won by a sizeable margin on Sunday, 10-5.

Arizona –
Friday – A three run eighth inning led the AZL Cubs to a 6-4 win.
Saturday – Arizona had Saturday off.
Sunday – As of 11:30 PM this game had no updates on the Arizona Cubs website. I assume it had been delayed for some reason. In case anything did happen, the box score should be linked off this page.