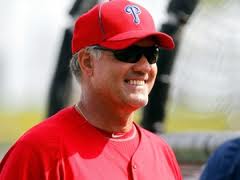 Three years ago, the Chicago Cubs needed a manager. Lou Piniella had long moved on – either before or after he stepped down and handed over the late-season reins to interim manager Mike Quade – and the Cubs’ decision appeared to come down to Quade, or the rising managerial star in the minor leagues.

That star just happened to also be a star in the hearts and minds of the fans as a former player. It was Hall of Famer Ryne Sandberg, who had just come off a Manager of the Year campaign at AAA, having worked his way up the ladder from the low minors.

Sandberg did not get the job – it went instead to Quade, and the Cubs underperformed in 2011. Quade was dismissed thereafter when the new front office took over, and, once again, the Cubs were looking for a manager. Sandberg had, in the meantime, taken the AAA managerial job in the Phillies’ organization.

Perfect fit, right? The front office didn’t see it that way, immediately ruling out candidates that didn’t have any Major League coaching experience. Sandberg would not be returning, and there was much gnashing and wailing.

Sandberg wound up becoming a third base coach with the Phillies, and, today he was named the team’s interim manager after long-timer Charlie Manuel was let go.

I wish Sandberg nothing but success, and I’m happy to see him get the opportunity.

I’m also very happy he didn’t get that opportunity with the Cubs for 2011 or 2012. Those teams were, by design and poor construction, absolutely terrible. Sandberg would have been no fix, and – inevitably – the meatball contingent of the fanbase would have turned on their former hero much in the way Dale Sveum still catches flak from fans who don’t appreciate the finer points of a deep rebuild. I didn’t want to see that happen to Sandberg, and I’m glad the front office instead brought in a guy they felt was the best bet to steward a team very much in transition.

Good luck to Sandberg. Kudos to the Phillies. Hopefully Sandberg does well, and gets that interim tag taken off after the season just as Mike Quade did the first time Sandberg missed out on a managerial job. And hopefully things go better for Sandberg thereafter than they went for Quade.