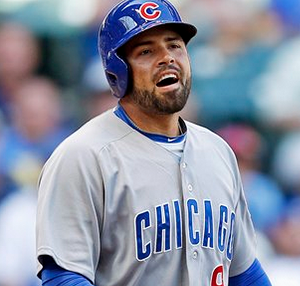 Trading in August is both complicated and difficult. Because of the requirement of securing trade waivers before a player on the 40-man roster can be dealt in August, we usually see little activity in the month (except for the occasional biggest trade ever). We can now say we also see some serious gaming.

Last week, the Chicago Cubs dealt David DeJesus to the Washington Nationals after they’d claimed him on waivers. That deal netted the Cubs a PTBNL or cash (believed to be a nominal amount of cash), but mostly it saved them the $2.5 million DeJesus was still owed. It was sad to see DeJesus go, but the consensus was: why not save a little money in a lost season, and then try and bring him back later? A side consensus was: why are the Nationals adding an outfielder right now?

Immediately upon acquiring DeJesus, the Nationals placed him back on waivers. Had they made a mistake? Was it just the usual August maneuvering?

Nope and nope, as it turned out. The Nationals managed to trade DeJesus to the Tampa Bay Rays, revealing their clever plan all along (despite all the BS from various Nationals’ personnel about how happy they were to get DeJesus). This was market exploitation at its finest, and the Nationals deserve some credit. By claiming DeJesus in the first place, the non-competitive Nationals took a $2.5 million risk that they’d be able to not only pass that contract on to someone else, but that they’d also be able to get a prospect in the process. The risk paid off, we think, in that the Nationals will get a PTBNL for DeJesus, and the Rays will be taking on his contract. Presumably, the PTBNL the Nats are getting exceeds the value of the PTBNL/cash they gave up to get DeJesus. (From GM Mike Rizzo’s comments, it sounds like the PTBNL is a quality 22-year-old pitching prospect.)

The Nationals accomplished this feat because of the nature of August trade waivers. You can read up on it in depth in the first link above, but the gist is that the Cubs had to offer DeJesus (and his contract) to every team in baseball if the Cubs wanted the option of trading him. The Nationals, with a sub-.500 record in the NL, had one of the first cracks at saying, “yeah, we’d take him,” and they took advantage of that opportunity, knowing that other teams that actually wanted to use DeJesus this year wouldn’t have a shot to get him unless they first went through the Nationals. It was a bummer for the Cubs, but that’s how it works in August.

That the Nationals managed to game the system says nothing about whether or not the Cubs screwed up. On review, it’s really hard to say they did.

The only question for the Cubs in this process was whether it was worth dealing DeJesus to the Nationals for full salary relief and a (maybe) PTBNL or (probably) a little bit of cash. Whether other teams further up the waiver chain might have interest in a DeJesus trade was of absolutely no moment to the Cubs. They could do nothing about it, and it wasn’t worth considering at that time. Their options were to trade DeJesus to the Nationals, or to pull him back and keep him for the duration. At that point, only the Nationals were in a position to concern themselves with making a trade with those other teams.

I suppose you could blame the Cubs if they had better offers on the table on July 31, refused to pull the trigger, and then had to settle for merely pawning off the contract a few weeks later. We’ll likely never know how that all shook out, and should keep in mind that DeJesus was coming off a shoulder injury at that time, and trade activity around baseball was extremely weak.

(Alternatively, you’d hope that, of the reportedly many AL teams interested in DeJesus, none were interested in DeJesus mostly for 2014. If some were, then the Cubs could have pulled DeJesus back when the Nationals claimed him, and then could have traded him for better value in the offseason (costing them only $1 million in salary for the rest of the year).

The three problems there are that (1) I really doubt teams wanted DeJesus only for 2014, given that the claiming team after the Nats was the Rays – a team very much in contention this year; (2) that $1 million in savings isn’t nothing; and (3) if a team was wanting to trade for DeJesus for 2014 (and his $6.5 million option), then the Cubs wouldn’t have a chance to pick him back up in the offseason.

(Then again, if a team was willing to pay DeJesus $6.5 million next year, I’m thinking he wouldn’t have been coming back to the Cubs anyway.))

We can be a little mad about the waiver system in August, but the circumstances here were so unique that I don’t think we’re going to see this kind of thing happen all that often. You’d have to have a player valuable enough that many teams want him – and teams know that other teams want that player – but on a contract that his waiving team is willing to let him go for nothing if another team is willing to take on the contract. That’s going to be exceedingly rare in this day and age, which is probably why we haven’t seen this situation pop up.