Cubs Pitching Prospect C.J. Edwards is Getting a Whole Lot of Love (UPDATE: But Caution) Skip to content 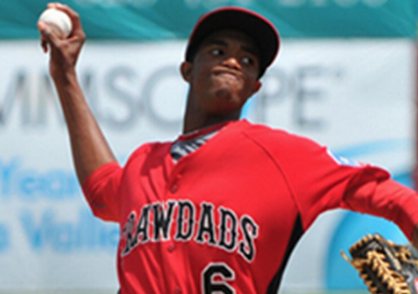 Chicago Cubs pitching prospect C.J. Edwards was already ascending the prospect rankings when the Cubs nabbed him from the Rangers in July as part of the Matt Garza trade. Although he was but a 48th round flyer in the 2011 Draft for the Rangers, Edwards quickly emerged as a quality arm. He’s always been skinny – he’s currently listed at 6’2″ and just 155 pounds – and was probably underrated in part for that reason.

After being drafted by the Rangers, Edwards refined his secondary pitches, and started dominating minor league hitters out of the gate. By the time the Cubs acquired him, Edwards was getting attention as a possible top 100 overall prospect from a few quarters. He’d posted a 1.83 ERA over 93.1 low-A innings with an 11.8 K/9 and a 3.3 BB/9.

And then the Cubs got him. They immediately promoted him to High-A Daytona, where he made six dominating starts, posting a 1.96 ERA, striking out 33 in just 23 innings, and walking only 7 (he also gave up his first professional home run). In the playoffs, although his innings were being watched carefully, he started twice, allowing no runs and just 1 hit and 3 walks in 10 innings. In those 10 innings, he struck out 11.

Against that backdrop, it’s no surprise that Edwards, 22, is getting a whole lot of post-season love. Not only was he named to the All-Star/All-Prospect lists from Baseball America and the executives/scouts polled by Jeff Passan, but he received exceedingly high praise in a couple of recent chats.

Keith Law was asked about Edwards yesterday, and he described the righty as a “potential star,” who is “athletic and does it all very easy.” Although Law cautioned that the weight/durability questions are legitimate, he went so far as to compare Edwards favorably to big-time Mets pitching prospect Noah Syndergaard. The latter is further along and has a better fastball, but Edwards has “far better breaking ball.” From the sound of Law’s thoughts, he’s putting Edwards in the same tier of pitching prospects as Syndergaard, who is believed by most to be a clear top 50 prospect.

If that’s high praise from Law, then Baseball America’s John Manuel is effusive.

When asked whether Syndergaard received any player of the year consideration by BA, Manuel says that he did not, instead noting that “I believe the pitchers at the top of our list were Archie Bradley and C.J. Edwards, Bradley for his success at a tender age at a challenging Double-A level, Edwards for sheer dominance. To me those were the best seasons by top pitching prospects.” Manuel goes on to imply that his top three pitching prospects – in all of baseball – are Bradley, Taijuan Walker, and Edwards.

On the Edwards/Syndergaard comparison, specifically, Manuel followed up: “Similar fastballs, Syndergaard probably has a bit better fastball due to the angle he creates to the plate, consistent velo and control, but Edwards at his best has the better curveball and secondary stuff, and he throws plenty hard.”

If, as the scouting reports roll in and post-season analysis is done, Edwards is now considered a top 10 pitching prospect in baseball (to say nothing of top three to five, as implied by Manuel and Law), that’ll place him easily within the top 30 prospects in all of baseball. In other words, he’d be right there in the same range as The Big Four (Javier Baez, Albert Almora, Kris Bryant, Jorge Soler).

UPDATE: BP’s Jason Parks offers his take (in response to this post), at least as far as the Edwards/Syndergaard comparison goes: “Edwards is a nice prospect, but his name doesn’t belong in the same sentence as Syndergaard. Not even close. I really like [Edwards’] arm; very easy and crisp. Both CB/CH flash. But putting a TORP label on him has little merit. Obviously, the body is a concern for me, and it will take a heavy workload to prove durability. I don’t see a 200IP body.”

It’s not hard to see that the range of evaluations on Edwards going into 2014 is probably going to be rather broad. Keep in mind: Syndergaard just reached AA at age 20, and put up a 5.75 K/BB ratio over 54 innings. Kid’s a stud. Being compared unfavorably to him is no insult to Edwards.