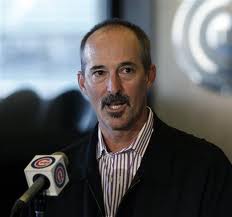 Although the Chicago Cubs have interviewed four (publicly-identified) candidates for their managerial vacancy – Manny Acta, A.J. Hinch, Rick Renteria and Dave Martinez – it would have been unwise to assume that, especially at a preliminary level, their list of candidates wasn’t much longer.

Indeed, with respect to coaches on teams that are/were still in the playoffs, the Cubs necessarily have to/had to wait until their team’s playoff run ended to even ask permission to talk to such coaches. That leaves open a number of possibilities, including popular Red Sox bench coach Torey Lovullo.

Lovullo, 48, managed in the minor leagues for a number of years after his playing career ended, most recently for Boston’s AAA squad. From there, he was plucked by John Farrell to serve as a coach on the Blue Jays in 2011 and 2012, and came over with Farrell to the Red Sox as a bench coach this past year.

According to Patrick Mooney, the Cubs are indeed interested in speaking with Lovullo about their managerial opening once the Red Sox’s run in the playoffs is complete. Based on Lovullo’s quotes in the piece, it sounds like he, too, would have interest in a shot at managing the Cubs.

Another coach who is back in the fold is only kind of a “new” name: it’s Rangers pitching coach Mike Maddux. One of the top candidates for the job in 2011 before reportedly pulling out of consideration late in the process, Maddux was initially rumored as an obvious candidate this time around. Reports quickly shot down his candidacy, which didn’t make a ton of sense, unless the Cubs learned something about him in the intervening two years that knocked him back (or didn’t like the way he backed out last time, though there are no indications that was the case).

Now he’s back, according to a report from NBC Dallas, as well as from George Ofman. Each says the Cubs have now asked permission to speak to Maddux again about their opening, and I would assume it will not be withheld this time, just as it was not withheld last time.

The Cubs are clearly searching far and wide for the best fit at manager, and I see plenty of attractive candidates. In fact, based on the relatively limited information we have so far on the six named/hypothesized candidates, I’m not sure I’ve got a huge beef with any of them. Call that homerism if you like, but I call it a front office that is good at putting a candidate list together. Hopefully this time around, they find the right fit.