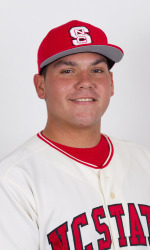 The Cubs, as they did last year, will spend the offseason scouring the waiver wire and minor league free agent list to pick up potentially, plausibly, theoretically, maybe useful future pieces (in addition to hopefully signing/trading for legit big leaguers). They’ve signed one such player out of an independent league, catcher Danny Canela.

Less a traditional minor league signing and more of an undrafted free agent signing, Canela was a senior at NC State this past season, but parted ways with the team before the baseball season started (for reasons that appear unclear). Canela played his final collegiate season at Lee University, where he hit .335/.443/.505 with 40 BBs against just 19 Ks.

Canela then went undrafted, and proceeded to play in an independent league this Summer, where he hit .360/.455/.582 (270 PA), and once again looked great in the K/BB ratio department (41 BBs, 50 Ks). The Cubs were probably following him closely, and decided to grab him after his successful debut.

The 22-year-old was a second team all-region performer in his junior season when he hit .348/.457/.507. It’s unclear why such a productive player (in a good league on a good team – he was the guy catching Carlos Rodon, so there were plenty of eyes on him) went undrafted after his junior season. Indeed, poking around the Internetz, it looks like he was considered a very legitimate draft prospect that year (and he was also drafted in the 37th round out of high school by the Tigers). He’s a stocky catcher – listed in the 5’9″ to 6′ range, and the 240 lbs range (for comparison, Dan Vogelbach is listed at 6′, 250 lbs) – so maybe the body type scared some scouts off. Because he’d left NC State in 2013, and because he was a senior, it’s easier to see why he wasn’t drafted this year.

In any event, the Cubs are hard up for catching prospects, and there’s no reason to turn your nose up at one who hit so well at a legit college program, and then duplicated it in independent ball. As is always the case with these kinds of signings, the odds are stacked against Canela emerging as a relevant piece, but it doesn’t hurt to give him a shot.