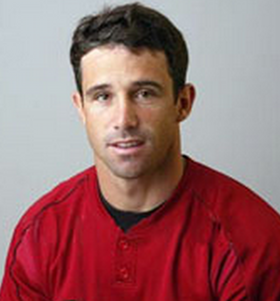 We might never know why things played out like they did, but, today, according to multiple reports, Padres special assistant Brad Ausmus is interviewing for the open Chicago Cubs managerial position.

Initially an off-the-wall suggestion by Peter Gammons, and then a casually discarded possibility by “sources,” Ausmus is now a legitimate candidate for the Cubs’ position, and could be among the last to be interviewed (together with Red Sox bench coach Torey Lovullo, as soon as the Cubs seek and receive permission to interview him). The Cubs are planning to have the position filled by the start of the GM Meetings (November 11).

Here’s what I wrote about Ausmus’s candidacy earlier this week, and it still holds true:

So what do we make of the way things have played out with respect to Ausmus? He was an under-the-radar candidate, and then quickly dismissed as a legitimate possibility. Then interest in him picked up from other teams, and his name started to pop up again. And now he’s being mentioned as a maybe possibility for the Cubs. The most logical explanation is that Ausmus has a fan or two in the front office, but didn’t quite have enough support to be brought in initially as a candidate. As a wave of interviews proceeded and – I’m speculating – nobody knocked it out of the park, those pushing for Ausmus started have their voice(s) heard a little more clearly. From there, we’ll see what happens. I don’t think it makes Ausmus a kind of fallback candidate. Instead, I think we’re just seeing the front office take a very, very measured and thorough approach to this hiring decision after the last go-around ended after just two years.

Give the guy an interview, and see if he can dazzle, right? What’s the harm?

Ausmus, 44, is an up-and-comer whose only managerial experience is with Team Israel this year in the WBC qualifying tournament. Hiring him after Dale Sveum was let go would be something of a risk, but it would also be an opportunity to potentially nab the right young guy before the rest of the baseball world latches on (of course, he’s already interviewed with the Nationals and Tigers (and the Red Sox a couple years ago), so it’s not quite a secret). As for his chops, he was a catcher in the big leagues for almost two decades before joining the Padres’ front office as a Special Assistant in late 2010. That would be the same San Diego front office that featured Jed Hoyer, Jason McLeod, and other familiar faces.

We’ll see what’s said when the interviews are through, but try to remember: the new thing isn’t always the best thing just because it’s new. Ausmus’s credentials will have to be evaluated alongside the other candidates, and there’s a paper argument to be made that he’s A.J. Hinch without the managerial experience. Does that make him better or worse? I doubt we’re in a position to know.

A hat tip to Julie DiCaro, who was first to note Ausmus’s presence in Chicago today.