Obsessive New Manager Watch: This is the Week, Right? Skip to content 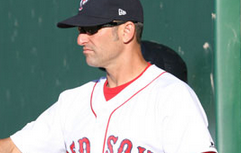 The Cubs will probably have a new manager soon. That’s a sentence I thought in my head a month ago, even if I didn’t commit it to print. I didn’t expect this search, the seeds for which were likely sewn long before Dale Sveum was actually fired, to take over a month. Absent the front office waiting on someone who was otherwise obligated like Torey Lovullo, I just didn’t see the reason for a long, drawn out process. But, as the month has played out, I’m constantly reminded: I’m not in the room. I’m not a part of the process. I don’t know what’s going on behind closed doors or the reasons for a long, drawn out process. Maybe there’s a good reason. Maybe there are several. So I continue wait, as you do.