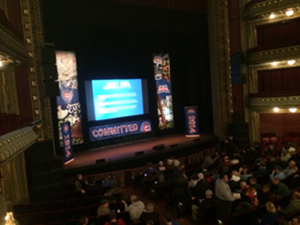 As I mentioned last week, I had the opportunity on Friday to attend the first of four sessions for season ticket holders at the Bank of America Theater.

On entry, it was easy to see who the star was going to be: Wrigley Field. Large photos of the planned renovations dotted the lobby, and the 100th anniversary celebration for the park was the focus of the decorations adorning the stage. I was struck immediately by the Cubs’ willingness to “sell” season ticket holders on the renovated Wrigley Field in the midst of a protracted process and fight that, at last check, had the Cubs holding out on doing a thing until they knew the rooftops around Wrigley wouldn’t sue to shut down construction (more on that later). Do they have more confidence in the renovation moving forward than they’re letting on?

The session opened with a video package, tugging on the heart strings with tradition, history, pride, etc. (I’m a sucker for these things.) The video indicated that Cubs fans are uniquely loyal despite prevailing heartache, but there is a plan in place for sustained success. Paraphrasing: “The Cubs are getting the right young talent, securing the right ad partners, and progress is being made – when it happens, will you be there? We are on our way, we are committed.” I was surprised and impressed that the Cubs willingly put the ad partner stuff right there in the mix with the rest. Although I agree that it’s a huge part of the Cubs’ sustained future success, discussion of revenue turns many folks off. Good on the Cubs for not shying away from the reality. They need revenue. Deal with it.

Team President of Business Operations Crane Kenney then took the stage to lukewarm applause and a smattering of totally mature boos. Kenney thanked the fans for their support, and said that everyone in the organization can see good things happening despite obstacles (he mentioned a hurricane in the Dominican Republic, the politics in Chicago, and the threat of litigation with the rooftops, specifically).

Kenney made sure to emphasize that he knows we’ve all heard this stuff before. But, paraphrasing: “I’ve been here since 1994, and this is different because of the Ricketts. They are placing big bets and making it happen.” Kenney mentioned the investments the Ricketts Family has made in personnel (the front office and the business side have expanded dramatically) and technology.

There was another video, then, on the tangible progress of the organization (heavy focus on prospects and facilities in Mesa, Arizona and the DR). It was narrated by Gary Sinise, which must have been one of those personnel investments.

Then there was more discussion on the facilities, and a subsequent video showing off the new digs in the DR and Mesa, as well as the front office’s new office facilities in Chicago. Reactions? Damn, the DR facility looks nice. And the Mesa facility is hilariously lavish when compared with the facilities in Chicago. (Kenney shared an anecdote that, 10 years ago, he saw a coach loading weights into a U-Haul and realized that the Cubs were physically transporting weights back and forth between Chicago and Mesa for Spring Training each year.)

On Wrigley, the phrasing in the video was “Soon, work will begin ….” The video then went through the renovation plans, all with “this will happen” type language. As with the photos in the lobby, the Cubs are clearly proceeding with confidence that the renovation, ultimately, will happen as planned. I don’t mean that to sound like I ever had doubt – I’m just saying that the renovation “story” to fans at this event had a very different tone than has been playing out in the media.

Kenney then mentioned that the renovation process is ongoing, with hurdles left to be faced. He said that the Cubs hope to resolve their issues with the rooftop partners soon. He added that the Cubs are at a severe competitive disadvantage, because they start $40 million in the hole every year, based on costs for upkeep, huge taxes, a below market media deal, the rooftops taking a cut (essentially), and political hurdles. Some of those items are hard to reduce to dollars, but I could argue $40 million is conservative.

Then there was another video on Wrigley (I told you it was the star), showing what the updates will be. (I was reminded once again how much I love the idea of the plaza west of the park.) From there, Kenney announced that next year will be a season-long party at Wrigley celebrating 100 years of the ballpark. Full details on the events are coming this week, he said, but he hinted at the Cubs celebrating a different decade in each of 10 homestands (featuring throwback jerseys, era bobbleheads, and old-timey toys). He also mentioned that the Cubs will have alternate road jerseys like the gray ones in the 1920s with a large “CUBS” across the front. (I assume this is the road jersey change that I reported on back in February.)

President of Baseball Operations Theo Epstein next took the stage, and I noted the majority of his comments on Friday. You can look back on his comments, and you’ll notice that they were extremely prospect-heavy.

At the end of Epstein’s prepared remarks, he introduced a surprise “guest” – it was new manager Rick Renteria, appearing via prerecorded video. Dave Roberts, a coach in San Diego, essentially served to introduce Renteria in the video, and spoke effusively – even noting that RR has “fire in his belly.” Renteria, himself, offered many of the same general thoughts that he’s shared via various outlets already about who he is as a manager, but it was interesting to see him in “address the fans” mode. The “bellyfire” definitely showed, and this is clearly a guy with a whole lot of passion.

The Presidents then welcome Dave Kaplan out to do a Q&A, first with Qs from Kaplan, then from the fans (things ran long, and there were very few questions from the fans – but to Epstein and Kenney’s credit, they made themselves available after the session in the lobby to be swarmed by question-seekers, each staying a long time after).

The first question, to Kenney, was about opting out of the WGN TV deal, and Kenney said there is a strong, historical relationship there. It sounded like there was some optimism for getting a fair deal done with WGN for their portion of the Cubs’ games from 2015 through 2019. Relatedly, insofar as a new TV generates more revenue, Kenney was asked about getting that money to the baseball side, and he reiterated Tom Ricketts’ frequent promise that it’s a “closed system,” and every dollar of revenue that comes in the door goes back into the organization.

When asked about the Renteria hire, Epstein shared a great anecdote. Paraphrased: “Rick was coaching on team and superstar player hit groundball and didn’t run it out. The players were looking at each other like, what are we doing. RR grabbed superstar, and said that’s not how we do things here. You will run hard or you won’t play. Then he took the player aside in the tunnel, and said, you know why I did that in front of everyone? Because you’re the best player, and they need to see you doing things the right way, so they will, too.”

The first fan question was directed to Kenney, asking for a candid explanation of just what is holding up the Wrigley renovation right now (I thought to myself that this was a perfect first question and I was glad it was asked – after the session, I ran into a BN’er named Mike who explained that he was the one who asked – good on you, Mike). Kenney did a little tap-dancing, but ultimately suggested that the hold-up right now is legislative. That would obviously be something of a surprise, given that the rooftop battle is widely believed to be the primary remaining issue (and the outstanding legislative stuff is expected to be perfunctory). I’ll have more on this in a separate piece soon.

A fan groused to Epstein about the Edwin Jackson signing, and Epstein took a middle road, noting that he didn’t have the year the Cubs hoped he would, but that his underlying metrics indicated he wasn’t all that bad. Epstein expects a good year from Jackson in 2014. Unfortunately, Epstein also said this, paraphrased: “We also got a little ahead of ourselves, and didn’t fully understand our situation. If we had full knowledge of business timing and plan at that time, we might have been more patient.” Ouch. He’s saying that, had they known last year at this time just how far off the big revenues were and/or how tight things were going to be, they might have waited to spend the cash. That paints a fairly dire picture, doesn’t it? Probably more dire than is intended, and I guess we already know that the Wrigley problems have delayed those anticipated revenues by a year. Add it to the evidence pile that big spending this offseason is not likely, though.

After the session, I had occasion to speak with, among other folks, Jed Hoyer. He was generous with his time, and fun to chat with, even as the theater staff worked eagerly to usher folks out. (And, in case you’re wondering, yes, he was aware of this place, which was as humbling as it was unnerving.)

Ultimately, I’d think it was an enjoyable experience for most in attendance, many of whom are likely considering their season ticket renewal decisions right now. In years past, the Cubs have had this kind of an event via conference call, so this was undoubtedly an upgrade. I was surprised that there wasn’t more venom flung in the process, but I suppose that, when you’re drawing from a fan pool that is limited to (1) the fans caring enough to buy season tickets and (2) the fans caring enough to attend a session in the middle of the day on a Friday, it’s likely to be a positive bunch.

The “feel” of the event and the presentation was very much one of “hey, we know that the last couple seasons have sucked, but we still think we’re doing the right thing long-term. And we really appreciate your patience and loyalty.” Probably about all they could do, and there’s probably going to be a similar feel this year at the Cubs Convention.