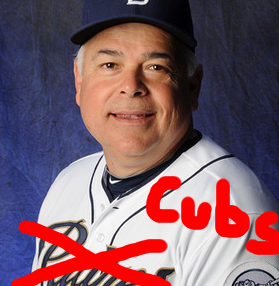 New Chicago Cubs manager Rick Renteria did a mini interview circuit shortly after he was hired, speaking with MLB Network and MLBN Radio.

In the MLBN Radio interview – from which you can hear a snippet here – we got our first taste of some of RR’s managerial philosophies, and he started off strong by emphasizing that a hitter’s job is to get on base. He also mentioned the old tried and true belief that you’d like to have on-base guys at the top of the order, and mashers to drive them in at the 4/5/6 spots. All fine. But then he terrified me slightly by following that up with, “You want guys to be able to move guys over when necessary. I think productive outs are a key element to everybody throughout the lineup.”

Eek. As we’ve learned over the last decade, except for extraordinarily limited circumstances (for me, at least when it comes to sac bunting, it’s pretty much 8th or 9th inning, down a run or tied, runner on second base (or first and second) and no outs – that’s it), there is no such thing as a “productive” out. Outs are, by their very nature, unproductive. You’ve got just 27 of ’em with which to work, and if a batter is up there trying to make a productive out, then he’s not up there doing the one thing that should be his job: getting on base.

That said, I’m not going to jump all over RR for a throwaway line in one of his first interviews. Hell, for all we know, he wasn’t talking about sac bunts, but instead about the happy accident of an out that moves a runner along, even though the batter was simply trying to get on base (because outs are going to happen when you put the ball in play – that’s part of the game – might as well move a runner along in the process). And the Padres were third from the bottom in sacrifice bunts last year in the NL, so it’s not like RR is coming from an org that was all about the sac bunt. (Aside: the Cubs were dead last. That could be the product of a proper philosophy … or few guys on base to begin with.) (Aside Number Two: The Padres sure did steal a lot of bases last year – 118, second in the NL – and they did it at the best clip in the league, 78%. They had seven guys with at least six steals.)

I’m not too worried about an impending reliance on giving outs away. It’s not like this front office is going to be interested in “productive outs,” and the games – not a sound byte – will be the judge.

Among his comments on MLB Network, RR indicated that he understands his role as part of the rebuilding process.

“I have to take [the front office’s] vision, make it my vision and put it forward between the lines,” Renteria said. “We see a club that will go out there, hopefully, and fight and scratch and claw their way through everything. I might be naive, and people think I might be nuts about me believing this club can go out and do certain things, but I feel that way, and I truly believe it, and we’re going to find out. In having some of the conversations I had with some of these kids yesterday, it might be a pretty fun season for us.”

That’s pretty much how it has to be for the manager of a rebuilding team. Your focus has to be the future, and the day-to-day implementation of the player plans, all the while trying to win (because, hey, that should be part of development, too).

Renteria also spoke to MLBN about his conversation with Starlin Castro and about why he goes by “Rick” after once being called “Rich.” Both interviews are worth checking out.