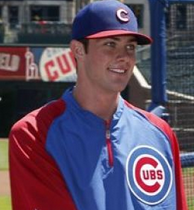 The Cubs’ farm system has the best collection of slugging prospects in baseball, and today we will take a look at the biggest power bat of them all. Even though he was just drafted this summer, Kris Bryant has already left his mark on not just the organizational rankings, but on the baseball-wide prospects ranking lists as well.

Two questions tend to dominate any analysis of Bryant: where will he play, and can he continue to hit as he moves towards the majors?

Bryant played at three different levels after being drafted in 2013, and wherever he went he left fans and scouts talking in glowing terms about his power. When we look at the numbers, it is easy to see why. I’ll ignore the rookie level Arizona League since he stayed there for just two games and focus on his time at Short-Season A Boise and High-A Daytona. First of all, let’s establish the slash lines in all their gaudy awesomeness.

That’s right, this guy slugged over .700 in the Florida State League, a league known for being tough on hitters. His wOBA (.495 with Boise and .491 with Daytona) and wRC+ numbers (209 with Boise, 212 with Daytona) only further drive home that Bryant is an offensive force to be reckoned with. Jim Callis was questioned in some corners for dropping the 80 Power label on him ahead of the draft, but so far he has done nothing to cast doubt on that lofty designation.

Unfortunately, there is a limit to what we can learn from these numbers. He did not play more than 18 games at any one level during the regular season, and he did not amass more than 77 plate appearances at any in-season stop. The sample sizes within each league really are not large enough to tell much of a story.

And while it is true that Bryant crushed the ball wherever he went, it is also true that he should have been crushing the ball wherever he went. Hitters drafted out of college are supposed to have success in the lower levels of the minors. We can’t fault Bryant for doing what was expected of him, but we can’t get too carried away heaping on the praise on the basis of those numbers either.

Bryant has posted some elevated strike out rates, including one of 27.4% with Daytona, but I am honestly not sure how much stock to put in those figures. Since he did not play even three weeks worth of games at any one level, he never really had a chance to adjust to any of the pitching he saw. As we saw with Baez, an elevated strikeout rate can be a short term problem that diminishes over time as the prospect makes the necessary adjustments to his approach and learns how opposing pitching are going to attack him. Until he has that time to make adjustments within a level, I’m not sure we can say with any confidence that high K% are going to be a long term problem. It is, however, something we will be monitoring closely as Bryant moves into the 150 PA territory next season.

His power is absolutely not in question. At every level he has as many or more extra base hits as he did singles, and that in turn led to his incredibly high SLG and ISO numbers. For example, very few players ever post an ISO over .300; Bryant did so at both Boise (.338) and Daytona (.386). As a pure slugger Bryant is in a category shared by very few other players. He has the most power in the Cubs’ organization, and it is between Bryant and Miguel Sano for the most power in all the minors.

All in all, even with the caution injected by his strikeout percentages, Bryant looks to me like a hitter who has yet to be seriously challenged. I think he will continue his rapid climb up the organizational ladder in 2014. Look for Bryant to get a longer than expected chance to work out with the major league team in spring training followed by an assignment to Tennessee. If he is torching Double A the way he has every league so far by early June, he could find himself in Iowa by midsummer. A 2014 September call-up is a very real possibility.

Defensively, I have few concerns about his ability to stay at third base. One widely publicized game notwithstanding, accounts of his defense are generally more positive than negative. Right now the team’s priority should be to give him plenty of chances at third to see if he will be able to handle that position in the majors. Should circumstances force him into a corner outfield slot, his needed adjustment time could be minimal. That said, I doubt the Cubs will let his glove slow his arrival by a notable degree. If his third base defense appears to be too much of a work in progress when his bat is ready for the majors, then the Cubs will simply have themselves a new left or right fielder.

There is one final slash line worth mentioning for Bryant – his line from the Arizona Fall League. As of the time of this writing, Bryant is hitting .358/.436/.746 over 78 PA in 17 games. That’s good for an ISO of .388, a wOBA of .515, and an wRC+ of 213. His walk rate clocks in at an unsurprisingly healthy 12.8%, and his strikeout rate at a moderately concerning 29.5%. Once again, because 17 games is not much time to make any adjustments, I don’t think we need panic over that strikeout rate. It should be monitored with caution into the 2014 season, but until he has a chance to show that he is able (or unable) to make adjustments and bring that rate down there is not much point in dismissing him as a bust.

What is clear from those numbers, though, is that he is still not really being challenged. So far he has easily lived up to his pre-draft billing as an impact bat in the making.

It is tough to put a ceiling on Bryant right now because he has not spent very long in any one place. I suspect he will always be a higher strikeout, higher walk rate kind of hitter, and that he will continue to hit more than his fair share of extra base hits as he moves up the ladder. Until he is finally challenged and stays in one league for a couple hundred plate appearances, though, I hesitate to say more than that.

To me Bryant looks like a major league slugger in the making, and one that is a fairly safe bet, given his current level, of reaching the majors. Cub fans should be very happy at the prospect of seeing Baez, Rizzo, and Bryant anchoring the middle of the order one day in the not too distant future.