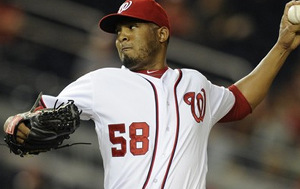 We know that the Chicago Cubs are in the market for another lefty reliever this offseason, but we also know that they’re going to be very conscientious about how they spend their dollars for a little while.

If they decide to try and pick up a lefty on the cheap, a few options just came onto the market during yesterday’s 40-man roster shuffling around baseball: Tony Sipp, Fernando Abad, and Tyler Robertson, who were just DFA’d by the Diamondbacks, Nationals and Nationals, respectively.

Sipp, 30, was effective intermittently in his earlier days with the Indians, though it was driven by an extreme flyball approach, which made him susceptible to the long ball. He gave up a few more hits than usual last year, and the Diamondbacks decided to let him go. Sipp would be arbitration-eligible if grabbed off of waivers, and would probably get a raise on his $1.275 million 2013 salary despite a down year. Although his might be the name you recognize on that list of three, I’m not sure he’s the most attractive target.

Robertson, 25, is your prototypical mid-20s lefty relief prospect who hasn’t broken through. That is to say he strikes out a ton of batters and walks a ton of batters. He might be worth a stash if he’s a guy the Cubs were already eyeing. With someone like Zach Rosscup already available to the Cubs internally (he walks more than Robertson, but also strikes out a bunch more), I’m not sure there’s a fit.

Abad, however, seems to be the real winner in the trio. Although he turns 28 in a few weeks, Abad is not yet arbitration eligible. After struggling for three years with the Astros, Abad came to the Nationals on a minor league deal in 2013. He threw 37.2 innings with the Nationals, sporting a 3.35 ERA and a nice 3.20 K/BB ratio. From 2011 to 2013 (he debuted in limited fashion in 2010), his K/9 increased each year, and his BB/9 dropped each year. For his career, Abad has a 4.09 K/BB against lefties.

Moreover, Abad added three MPH to his fastball in 2013, so the uptick in effectiveness was not a hollow one. The more I study Abad, the more I wonder … why did the Nats DFA him? Do they already have a trade lined up? Because this wouldn’t seem to be the kind of guy you waive unless you want to lose him for nothing. Is there an off-the-field story here or something? Even the local media was surprised to see him DFA’d. I know Abad was a mere minor league signee last year, but didn’t he show something in 2013 worth hanging onto? As always, we have to be careful about “scouting the stats,” but based on everything I can see, there is a lot to like and dream on for the near-term.

If Abad makes it to the waiver wire, I’d like to see the Cubs take a chance on him if they aren’t already predisposed to disliking him for some reason. Compared to the options available in free agency, Abad might be as attractive – and probably more attractive, since he’d cost just a hair over the minimum.