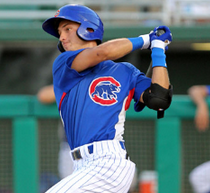 Baseball Prospectus continues to be awesome, and to expand its scouting reach and influence. The man helping, in large part, to drive that expansion is Jason Parks (not-a-professor-but-@ProfessorParks), the national prospect and player development writer at BP (#rig).

He chatted at BP yesterday about all manner of things, and it always makes for a good read. If you want to become a better student of the prospect game across baseball (pretty handy this time of year), it’s as good of a place to start as any. Among his Cubs-related thoughts …