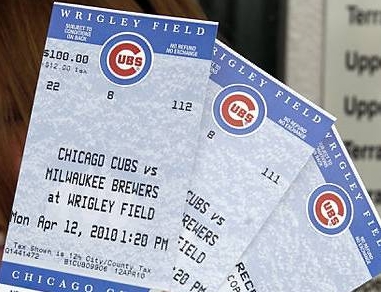 Anecdotally, it feels like interest in Chicago Cubs season tickets this year is the lowest it’s been in a decade. In something that would have been unthinkable just three years ago, I now regularly see comments/tweets/emails/etc. discussing the following scenario: my number is finally up on the season ticket wait list, and I’m trying to decide whether to buy season tickets.

Crazy, right? I mean, that’s why you’re on a ten-year-long wait list, isn’t it? When the opportunity comes up, you jump.

… but I can understand where these folks are coming from. With a lengthy rebuild underway, and a product on the field that is less than compelling, folks have to decide whether to pony up for a couple years of probably weak baseball in exchange for locking up those tickets when the Cubs are good again (and when getting season tickets will be much more difficult).

It’s not the situation you’d like to see Cubs fans in, given the importance of ticket revenue to the long-term health of baseball operations. And a strong season ticket holder base, similarly, is hugely important, because it’s a guaranteed chunk of that revenue – rain or shine. Are the Cubs in trouble in that regard?

Maybe not. Some encouraging news from Cubs VP of Sales and Partnerships Colin Faulkner, by way of Danny Ecker at Crain’s. Faulkner says that season ticket renewals are actually up this year compared to last year, thanks in large part to a more focused sales effort. In the last year, the Cubs have beefed up the customer service in their ticket sales department (perhaps some of you have noticed), and have worked hard to ensure that current season ticket holders have a good reason to remain current season ticket holders.

The increase in renewals is about five percentage points from last year, according to Faulkner, which puts the renewal rate in the mid-80s, percentage-wise. That renewal increase amounts to an increase in guaranteed revenue of about $3 million, by Ecker’s calculations. For more on that piece, and some additional thoughts from Ecker and Faulkner, make sure to read the piece over at Crain’s.

As they say, it’s easy to keep an old customer than to find a new one. So holding onto the season ticket holders the Cubs already have is a great start to stabilizing the falling attendance over the past five years. (Once stabilized, selling more single game tickets is going to be the key to bringing attendance back up. And that’s likely to come only when the Cubs actually start winning again.)

Of course, if the renewal rate keeps increasing, there won’t be many new season tickets to go around when the Cubs are on the verge of a decade-long successful run, as they could be very soon. Puts the decision to secure season tickets when offered the chance into a new light, eh?