Mariners Trying to Have Their Own Stupid Pujols Contract, but Talks with Robinson Cano Break Down (UPDATE) Skip to content 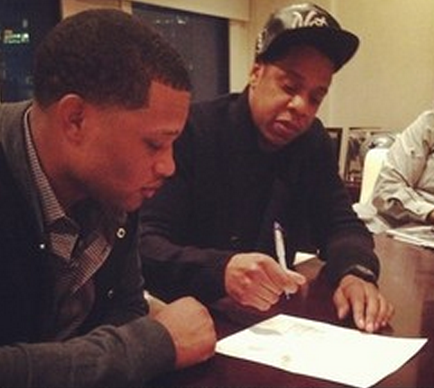 Last night, everyone’s eyes were on the sky as Robinson Cano and his agent (that’s the anthem, get your damn hands up) flew to Seattle to meet with the Mariners, who are apparently bound and determined to land Cano this offseason.

The other primary suitor for Cano, the New York Yankees, for whom he’s played his entire career, reportedly haven’t planned to exceed an offer in the $175 million range over about seven years for Cano. The Mariners, on the other hand, have offered Cano nine years and $225 million, according to Jon Heyman. Apparently the Mariners expected Cano to accept that offer last night on his trip to Seattle, but he didn’t. His agent, Jay-Z, arrived and demanded 10 years and $252 million (per NYDN), leading to some hurt feelings and a cessation of negotiations. For the record, Jay-Z, a nine-year, $225 million deal would have been a plenty impressive “get.”

We’ll see if talks with the Mariners restart at some point, and/or if Cano shops around the original offer, but it’s virtually impossible to see any team beating it. Instead, Cano’s still probably hoping the Yankees are willing to meet somewhere in the middle of their base offer and the Mariners’ extravagant one. As sad as it is for Seattle, players from the Dominican Republic aren’t likely to leave the East Coast (and the exposure of New York City) for the Pacific Northwest unless they’re getting paaaaaid.

If the Mariners get what they want, they could be the latest team to sign a mega contract, only to regret it a year or two later. Consider that just two years ago, the Angels signed Albert Pujols to a very similar 10-year, $240 million contract. Pujols, then 31, just like Cano, was coming off of a stretch where he’d posted just one season below 7.0 WAR in the previous nine seasons. Cano has topped 7.0 WAR just once in his career (2012). That’s not to say that Cano is not a fantastic player. It is simply to point out that these kind of mega contracts can seem like a not-so-terrible idea on day one, and rapidly deteriorate (Pujols has accumulated just 4.4 WAR, total, in his two seasons with the Angels). Maybe if you can get a guy at 28 or 29 you consider giving him eight years (I’d still have heartburn beyond that), but not at 31.

Still, Seattle has some non-baseball reasons for wanting to land a big star like Cano (their attendance has halved – literally halved – over the last decade), and there could still be overall value there. Maybe.

Cano ending up in Seattle is actually of considerable import to the Chicago Cubs’ offseason plans in at least two ways. First, Cano departing the Yankees frees up considerable cash for New York to spend lavishly elsewhere and remain under the $189 million luxury tax cap. That could mean a considerable offer to Masahiro Tanaka, if he’s posted, or a binge on someone like Shin-Soo Choo (which could, in turn, shake up the outfield market sufficiently that someone like Nate Schierholtz becomes even more valuable in trade (an aside: the Yankees pursued Schierholtz last year, and, if they did want to add a corner outfield power bat, I’d think Schierholtz would do exceedingly well in that ballpark)). The Yankees with money to spend can be a crazy and unpredictable thing.

Second, if the Mariners pony up huge for Cano, you can be certain that they’ll make other additions to the roster to try and capitalize on the Cano/Felix Hernandez base, which projects to be most impactful over the next few years. That could mean increased spending elsewhere (outfield?), or it could mean a serious move for a starting pitcher like David Price, to whom they’ve been closely connected. If the Rays try to squeeze the Mariners, knowing that they aren’t going to want to spend big on Cano to merely win 81 games in a competitive AL West, maybe the Mariners turn instead to the next best arm on the trade market: Jeff Samardzija. The Mariners likely have the pieces to entice the Cubs, though they probably wouldn’t include top three pitching prospect (in baseball) Taijuan Walker. But, who knows? Teams desperate enough to spend $225 million on Robinson Cano – $50 million more than the next suitor – might be desperate enough to do something crazy with their prospects.

Maybe this negotiating snafu with Seattle pushes Cano back to New York (who would seem to have a heck of a lot of leverage now), and none of this is relevant. Cano to New York for huge dollars, by the way, seems like the best outcome for the Cubs anyway.