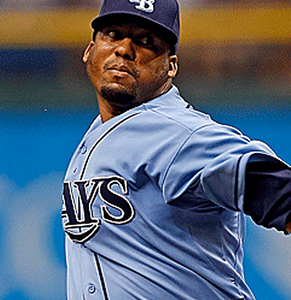 In the vein discussed a little bit ago, the Chicago Cubs aren’t likely to make a big splash this offseason on the free agent market. Instead, you can look for them to continue to target short-term, low-cost players that they can see providing “value.”

To that end, as the Cubs pursue multiple starting pitching options – for performance, depth, and, let’s be honest, flippability – like Scott Baker and Jason Hammel, you can add another starter to the mix: Roberto Hernandez.

Ken Rosenthal says the Cubs are among the teams interested in the 33-year-old righty formerly known as Fausto Carmona. I am not surprised to see the Cubs going after Hernandez, as I wrote about the possibility just a little over a week ago:

There are some positive signals [in Hernandez’s performance], like his increased K rate (17.6%) and reduced BB rate (5.9%) last year. He got a ton of groundballs, and generally pitched well enough to be a satisfactory fifth starter in most rotations … except for the home runs. Almost 21%(!!!) of the flyballs he gave up last year left the ballpark. He gave up a ridiculous 1.43 HR/9, which was much higher than his career mark (which, at 0.94 per 9, is already fairly high). Some of that is due to his own mistakes, but usually you see positive regression in a situation like that. If he comes for a song, sure, sign him. He’s 33, and has the potential to develop some flip value by the deadline. But, make no mistake – that’s all he would be.

Yeah, I pretty much stand by that now that I know the Cubs might actually be interested. There are better back-end options, but maybe not ones that will provide as much possible surplus value as Hernandez (read: dudes with upside who will sign for cheap). The question: is that 2.97 K/BB ratio last year the real Hernandez, or is the real guy the one we used to call Carmona, who had a much more pedestrian 1.55 K/BB ratio before coming to the Rays last year?

Hernandez fits the mold of the pitchers the Cubs are targeting, generally, this offseason (starter or reliever): no significant velocity concerns, poor results recently based on a likely-to-normalize HR/FB rate, and other “bad luck” indicators (BABIP, LOB%, etc.).

For a few million bucks, Hernandez is a fine addition, and he doesn’t stop you from going after Tanaka.