Another Reliever Rumor: Cubs May Be in on Joaquin Benoit Skip to content 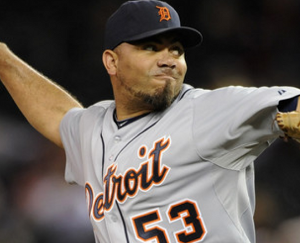 Most of the reliever names we’ve heard connected to the Cubs thus far have been of the buy low, offer an opportunity to close variety (with the exception of Edward Mujica). The Cubs are, however, now connected to one of the bigger relief names on the market.

Jeff Passan hears from sources that there’s a belief that Joaquin Benoit will ultimately wind up with the Cubs, Indians, Padres, Mariners or Yankees. That’s quite a bit of competition, but I suspect there wouldn’t be a belief out there that the Cubs would get Benoit if they weren’t talking to him.

Cost aside for a moment, Benoit makes sense for the Cubs. Coming off of a four-year post-surgery stretch where he’s put up a 2.53 ERA over 259.1 innings, Benoit was a part-time closer for the Tigers in 2013. He is presumably looking for a place to keep closing, and he might find that in Chicago. Indeed, the Cubs are probably hoping the clear path to closing is an incentive for the 36-year-old to sign on with a rebuilding club, but he might have that same opportunity in Cleveland or Seattle, at least.

Benoit made $5.5 million per year in his three years in Detroit, and there’s no reason to think he’s going to take much of a discount given his effectiveness. I’d think two years and $12 million would be the bare minimum, with three years and $20 million being the hilarious height of what he could get.

If the Cubs could get Benoit on a two-year deal, even at $6 or $7 million per year, it seems like a very good risk for what could become a nice piece to have at the Trade Deadline. I know, folks hate to hear that, but a 36-year-old, short-term, expensive closer isn’t exactly coming aboard to be a part of the next championship team. He’d be an asset, and one of the few marketable ones the Cubs could have by midseason. Is it too much to pay for a late-inning arm? Eh. Maybe. But if the Cubs aren’t going to spend big this offseason to put a playoff contender on the field, they might as well spend on the kinds of assets that can be spun off for long-term pieces later in the year.

In the end, I don’t like the Cubs’ chances of landing Benoit, short of an over-the-top bid. He’s going to have a host of options, and, given the exploding price tags for these kinds of short-term investments, the bidding might get whacky. The Cubs may find it better to try and reclaim value in a lower-cost arm – like a John Axford – whom they can insert into the closer’s role.

That all said, it’s still nice to hear the Cubs mentioned in connection to one of the top tier free agents, even if it’s just a bullpen arm.

UPDATE: Buster Olney says Benoit is looking for $7 to $10 million annually. I don’t think he’s going to get the upper end of that, which what “proven closers” are getting in this market. Two years and $14 million sounds about right for Benoit. If he can do better, then he should do it elsewhere.