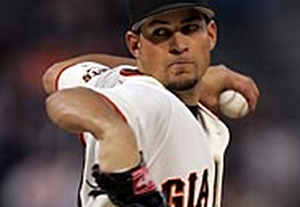 There are guys that you’d see your favorite team sign to a deal, and it would make you roll your eyes (if you’re kind) or type obscenities (if you’re not) or flail your arms (if you’re weird).

But if your team signs that very same guy to a minor league deal, it can actually make you smile.

So it is for me with lefty Jonathan Sanchez, an erstwhile starter who, to be quite candid, was not a hugely effective starter in his best days, and has not seen his best days in several years. According to Paul Sullivan, the Cubs have signed Sanchez to a minor league deal, which, for the meatballs among you, should be read as: no risk deal with no meaningful downside whatsoever. Sullivan adds that Sanchez’s deal has some special incentives if he actually makes the big league roster. We’ll see Sanchez in Spring Training.

The Cubs’ interest in Sanchez was reported last week, by Sullivan’s colleague Mark Gonzales, who said the Cubs were considering Sanchez as a reliever, and I offered some thoughts:

What’s the point of even consider guys like this? Well, you never know where a successful, low-leverage, short-outing reliever might come from. Despite their obvious shortcomings, each of [Clayton] Richard and Sanchez had, at one time, big league-calibre stuff. And then you consider that lefties have hit just .240/.290/.321 off of Richard for his career (3.27 K/BB), and lefties have hit just .218/.313/.363 of off Sanchez (2.66 K/BB), and you see why it’s worth giving guys like that a shot.

Although Sanchez’s sample in 2013 is too small to draw any meaningful conclusions, it’s worth pointing out that, even in his abysmal 2012 season, lefties put up an OPS nearly 200 points worse than righties (of course, that figure .857, was still pretty awful). A split like that, on a guy who was at one time a big league capable starter, and you have the makings of a surprisingly effective LOOGY (lefty one-out guy – otherwise known as a lefty specialist, or a dude whom you bring in just to face a lefty batter).

Sanchez, 31, has lost a couple MPH off of his fastball from his most effective days (92 down to 90ish), so I wonder if he could turn it back up in short bursts of relief.

To be sure, Sanchez is just a guy among many who is going to get a look in Spring Training, if he does show some effectiveness as a LOOGY, the Cubs will have an interesting decision to make about the composition of their bullpen. With James Russell and Wesley Wright already in the fold as lefties, and with five other spots to be divvied up among guys like Sanchez, Jose Veras, Blake Parker, Justin Grimm, Hector Rondon, Pedro Strop, Carlos Villanueva, Zac Rosscup, Brooks Raley, Alberto Cabrera, and I could go on with a couple more young arms. The point? If the Cubs are going to carry Sanchez, it’s because there was a rash of injuries or a trade or two. Sanchez showing effectiveness could allow the Cubs flexibility in shopping Russell, for example.