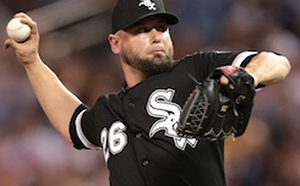 The Chicago Cubs’ bullpen search largely came to a close after they grabbed a much needed back-end arm (Jose Veras) and a second lefty (Wesley Wright) earlier this offseason, but that doesn’t mean they won’t continue exploring their options.

Bruce Levine reports that the Cubs are expressing interest in righty Jesse Crain, whom you might remember as a recently-dominant reliever with the White Sox. The Cubs, together with several teams says Levine, are reviewing Crain’s medicals. That’s a significant piece of any pursuit of Crain, of course, because he’s coming off of a serious shoulder injury.

Given the Cubs’ bullpen depth, the instinct is to wonder if the Cubs are considering Crain only as a minor league deal/non-roster invitee possibility. With the shoulder concerns – the injury ended his season in June, and shoulders are scary – it isn’t insulting to suggest a minor league deal. That said, maybe Crain’s medicals look good right now, and maybe plenty of teams are willing to bet a guaranteed deal on his shoulder holding up, given the talent. Indeed, Jon Morosi said last week that Crain was deciding whether to grab a two-year deal (while he can get it), or take a one-year deal (to rebuild his value).

Could the Cubs add Crain? Sure. If talent is available at a reasonable price, you grab it. Do the Cubs need Crain to have a successful bullpen – or even to have enough flippable options? Not necessarily.

Is Crain worth getting on a big league deal for the Cubs? Without knowing the plans for some of the younger bullpen pieces, it’s hard to say. The Rondon/Parker/Grimm contingent, while exciting and full of upside, aren’t sure things. And, unlike Crain, they don’t come with inherent flippability (even though, technically, it’s not like you couldn’t trade them if they were dominating). To be clear: the Cubs’ bullpen is much better with a healthy Crain than without him.

I guess we’ll just monitor. I’ve got to believe Crain will find a better deal elsewhere, though.