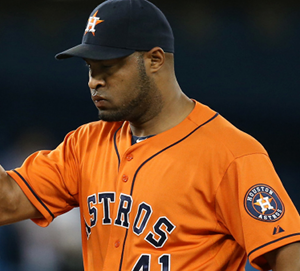 After the very public, physical-related drama between the Orioles and free agent Grant Balfour, we are reminded that the phrase “pending a physical” is not always a formality.

Fortunately, for the Cubs’ reliever signing, it was.

Veras will compete, perhaps with a leg up, for saves out of the gate. As I wrote about 10 days ago when the deal was reported:

Veras, 33, did a fair bit of closing with the Astros last year before being dealt at the Trade Deadline to the Tigers (who used him in a setup role). Although he didn’t establish himself as a reliable bullpen option until he was almost 30, Veras has put up a 3.55 ERA over the past four seasons, racking up 248.2 innings, 272 strikeouts, and 5 teams. Although he’s an overpowering guy, he’s also a wild guy: 2013 was the first season he’s ever had a BB/9 below 4.0 (it was 3.2). Lately, his FIP tends to hang out in the mid 3s, indicating he’s a good, not dominating reliever. You hope, with a guy like Veras, that his 2013 walk rate (8.7% versus career 12.0% mark) was not a blip so much as a change in approach.

Will Veras be anointed the closer right out the gate? It doesn’t seem like it, though getting him on a one-year deal with a reasonable option for 2015 seems like it was probably in part because the Cubs could offer the opportunity for Veras to win the closer’s job. Add in the incentives, which are almost certainly tied to games finished, and you’ve got a guy that probably chose the Cubs in the hope that he can be a closer, and then find another big-time contract after a year or two. Whether he’s actually used in that role is something that remains to be seen, and will probably be determined by his own effectiveness.

With the reasonable option for 2015, and the state of the Cubs’ overall roster, it’s fair to say that, yes, Veras is a flip candidate. Hopefully that’s not all he is to the 2014 team, but realism reigns.