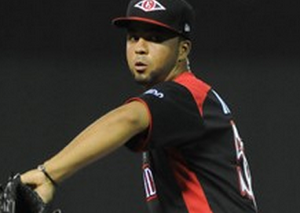 That headline may be a jolt to some of you who follow Cubs prospecting closely, and wonder how the Cubs have an award-winning-caliber pitching prospect that you don’t know much about.

The rub is that calling Pimentel a “Cubs prospect” is a bit of a delicate dance. It’s not because of Pimentel’s age (he just turned 24 this month) or his performance throughout his minor league career (he’s got some intriguing numbers). Instead, it’s weird to call Pimentel a “Cubs prospect” because the Cubs actually just signed him earlier this offseason to a minor league deal after the Rangers let him leave in free agency. But the signing was among the better minor league deals you’ll see, as I noted at the time:

Pimentel has intermittently been a top 30 prospect in the Rangers’ system, but, having signed as a teenager, didn’t quite break through by the time he qualified for minor league free agency (he’s now 23, and turns 24 in December). He’s a tall, thinner guy (6’3″, 180 lbs), and tends to keep it in the low-90s.

The last three years, as Pimentel has reached the AA level (and mostly hung around there), the righty starter has seen his H/9 drop dramatically and his K/9 rise. But he’s also seen his BB/9 tick up to an unacceptably high level – until 2013, when it dropped back to a passable 3.1 per 9. Combine that with the uptick in strikeouts, and he sported an excellent 3.02 K/BB last year at AA. As I said, as far as minor league signings go, Pimentel is about as good as it gets for pitchers. At 24, you’d like to see him serving as depth at AAA next year, and maybe the Cubs’ coaching staff can get him over the hump that he couldn’t quite clear as a Ranger.

With the trading that the Cubs and Rangers did this Summer, you’ve got to figure that the Cubs had scouted Pimentel very, very closely. They knew there was a chance he would become a free agent after the year, and I bet they pounced the moment he filed.

Since signing, Pimentel headed to the competitive Dominican Winter League where he posted a 1.67 ERA over 37.2 innings (7 starts, 4 relief appearances). He struck out 32, walked 14, and gave up just 2 homers. And, as that tricky headline indicates, he took home the league’s top pitching honors.*

The Dominican Winter League wrapped up its regular season last week, hence the awards, but the playoffs begin today.

*(Hopefully the article’s indication that Pimentel is 25 is just a typo, and not an indication of any birthdate shenanigans – all major sources, including MiLB.com, Baseball America, Baseball Reference and FanGraphs, to name a handful, list Pimentel’s birthdate as December 1, 1989. That would make him 24, not 25.)