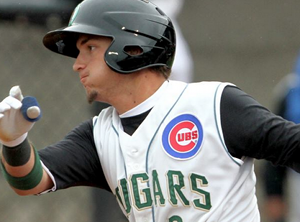 Albert Almora might be the toughest player to project into 2014. There is a good case to be made for starting him at any of three different levels in the farm system, and there is good reason to suspect that he’ll have little trouble hitting at any of those levels. With the exception of one small issue, his stat line is as pristine as any in the organization.

Figuring out when he might reach the majors is also tricky.

More on those projections after this disclaimer. The goal here is not to re-rank the prospects (that comes next year) or to assess the strengths and weaknesses of farm as a whole (that also comes next year). The goal for this series is to take each prospect individually, study the progress made so far, and see what we can learn about the future for that player.

As good as Almora’s stat line is, don’t forgot that his best tool is probably his defense. He was praised as providing Gold Glove calibre defense in center field since he was drafted, and so far we have no reason to doubt that.

Albert Almora, OF
Born: April 16, 1994
Acquired: He was the sixth overall pick in the 2012 draft, but he will probably always be known as the first pick of the Theo Epstein era in Chicago.

We have seen better overall numbers, but not very often. The .376 OBP and 11% strikeout rate in particular strongly suggest that Almora has a very advanced understanding of the strike zone. Numbers in that range often accompany an excellent batting eye and the ability to make solid, consistent contact.

However, if there is a red flag on Almora, and I’m not sure there really is one, it may be currently masked by the same batting eye and contact abilities. Almora’s 6.3% walk rate with Kane County this year was a career high (admittedly, his career has been quite short). A 6.3% walk rate in Low A is not much to write home about, but in this case I’m not sure we really need to be concerned. His mediocre base on ball numbers were accompanied by a very good .376 OBP. In other words, even though he wasn’t walking a ton, he was hitting so much he still got on base at a very good clip. That is good, but it does not tell us a lot about his patience.

A free swinger who is just too good for his level will put up a line similar to Almora’s in the low levels, but start to struggle against tougher competition. On the other hand, a very good hitter with normal or better patience who is having no problem against lower level pitching will hit his way out of enough at bats that the walk rate could be artificially deflated. When facing more advanced pitching that is more skilled at working off the edges of the plate, he may show the capacity to lay off those pitches. After all, the point of patience at the plate isn’t necessarily to draw a walk, it is to selectively choose the right pitch or pitches at which to swing.

So which is Almora, the free swinger or the patient hitter? Right now we just do not have the numbers to tell us with much confidence. The scouts believe he has all the tools to be an elite hitter in all aspects of the craft, but tools are not the same as production. For that reason, we will need to keep an eye on Almora’s walk rates as he moves up the system. I don’t really expect there to be a problem long term, but I’ll be watching anyway.

There is another line, albeit a small sample one, that we should look at for Almora. In order to make up some of the at bats he lost due to injury, the Cubs sent Almora down to the prospect-heavy Arizona Fall League in October and November. Even though he was one of the youngest players in the league and was playing against pitchers that sometimes had years more experience than he did, Almora still put up some very good numbers in the desert.

Unfortunately, the sample size is too small to really draw any conclusions here. The decline in AVG, OBP, and BB% could be a cause for concern in some corners, but more likely are just the result of a player getting back into the game after a long layoff, and doing so against some of the best pitching he has ever seen. The slight increase in SLG is probably somewhat the result of playing in Arizona, but it also suggests that Almora was still able to make solid and consistent contact. Beyond that I don’t think we can learn anything definitive, but we would be justified in coming away from his AFL stint with a general feeling of optimism as we head into 2014.

Where Does He Go?

I see three possible places where Almora could start 2014.

One option would be a return to Kane County. I don’t think he has anything left to prove there, but it could be a good place for him to shake off any rust from his swing, make any final tuneups necessary from his injury-reduced season, and generally prepare to accelerate up the system. If he does head to Kane County, I doubt he stays there for long. Then again, I think this is the least likely of the three.

The second choice, and probably the most likely, would be Daytona. After playing well in the Midwest League last season, Daytona would be the next natural progression for him. If there were any fears of a recurring injury (doubtful), playing in the warmer weather of Florida from Opening Day could be a small benefit as well. While the better pitching of the Florida State League would be a tougher challenge for Almora, I think his peripherals hold up and he hits his way through the league with little difficulty. If he does go to Daytona, I suspect he’ll be promoted in mid-summer.

Prior to his AFL trip, this last option would have been an extreme long shot, but now I think it might be on the table. Double A. Yes, it would be a huge jump to go from Low-A to Double-A with nothing but a rehab assignment and a trip to the AFL along the way, but his limited results in Arizona hint that he might be able to handle Double A level pitching right now. If the scouts and trainers agree with that assessment in Spring Training, starting Almora in Double A starts to make sense.

For one thing, starting in Tennessee would allow Almora to spend the entire season in one place working with one set of coaches and trainers. That could be a nice added bonus considering that Almora will be entering this season with a grand total of 94 professional games under his belt. If he proves he can handle Double A, the Cubs would then be in a position to seriously consider opening 2015 with Almora on the major league roster. If he struggles, then Daytona is just a few hours away.

As I said, I think Daytona is the most likely destination for Almora when he leaves Arizona in the spring, but I would not be opposed to an aggressive promotion path in his case. I can’t say that about every prospect, but between the reports of Almora’s personality and work ethic and the numbers he has produced thus far, including the Arizona Fall League, I suspect he could handle it.

Almora has a floor that compares well to any of the Cubs Big Four, including Soler. His offensive ceiling is a little harder to peg, but I think he should produce at an above average rate for center field. Combine that with his defense, which draws rave reviews from everyone who sees it, and the Cubs could have a potential star in the making. If the OBP stays high enough (keep an eye on that BB%) he should be a candidate to bat at the very top of the order. If not, his bat should fit just fine around the seventh slot.

There is risk with Almora, as with any prospect, but most of the major risk areas don’t apply here. I will be watching closely to see how he adjusts his approach when faced with tougher pitching, but that is just about the only potential weakness to show up so far.

When he was drafted there was speculation in many corners that he would be the first high school player from that draft to reach the majors, and some went so far as to suggest that he would only need two years in the minors. He lost half a year to injury in 2013, but if he can stay healthy I would not be surprised if he meets that two year pace. I think this is a guy that Cub fans will start watching sooner than a lot of them expect, and could continue to enjoy watching for a very long time.