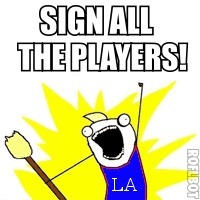 There they are. You knew it was coming.

Just a couple hours ago, I wrote this about the Los Angeles Dodgers’ ostensible hemming and hawing about their pursuit of 25-year-old Japanese stud Masahiro Tanaka: “Team CEO Stan Kasten tempered enthusiasm about the Dodgers actually landing Tanaka when asked, saying that he wouldn’t predict it. How much that actually means … eh. I still expect the Dodgers to be heavily involved.”

The #Dodgers have let it be known they plan to go all-out in their efforts to sign Tanaka, saying they and certainly won't be out-bid.

Given their resources, there was little reason to believe the Dodgers wouldn’t make a serious play for Tanaka, presuming he’s interested (and there are whispers that he prefers the West Coast). Sure, the Dodgers have seven capable starting pitchers as it is, but a couple of them are hurt (Beckett and Billingsley), and they have only three studs in the rotation right now. How can they be expected to compete?

That makes the Dodgers, the Yankees, and the Mariners all favorites for Tanaka in their own right. The Cubs’ chances seem further reduced. Still, we’ll see how things play out.

Incidentally, if the Dodgers won’t be outbid on Tanaka, and if reports of the Cubs’ plan not to be outbid are true as well, then he’s staring down an eleventy gajillion contract over the next 580 years. I could see going to two lifetimes on Tanaka, but, by that third lifetime, I’m not so sure that splitter will have as much bite.