Alex Rodriguez and the Specter of Labor Unrest Skip to content 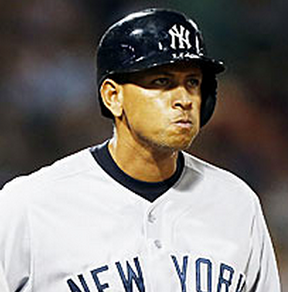 If you hadn’t already heard, this weekend, the arbitrator handling the appeal of MLB’s decision to suspend Alex Rodriguez for 211 games for purported violations of baseball’s drug rules determined that the suspension should be upheld, but reduced to 162 games. Generally, the parties were unhappy about the decision, but the only saber-rattling came from Rodriguez, who, in a statement featuring the usual I-didn’t-do-it-this-is-an-injustice stuff, plus a great deal of be-afraid-of-what-else-MLB-is-going-to-do-to-the-players-now, said that he planned to take his case to the federal court system. That could happen as early as today, but that’s likely to be an expensive waste of time – union arbitration decisions are nearly iron-clad when it comes to a federal court’s ability to review them. Unless the arbitrator went completely off the reservation with the decision, it will not be overturned.

In the wake of the decision, ’60 Minutes’ last night debuted a lengthy piece on the sordid ARod drama, featuring brand new allegations from Tony Bosch – the man at the center of the Biogenesis clinic, and, thus, at the center of the entire investigation. Among them? Bosch’s life was threatened by an associate of Alex Rodriguez, Bosch gave Rodriguez what sounded like gummy steroids immediately before games, Bosch personally injected Rodriguez, and Rodriguez sought further help from Bosch after seeing what Manny Ramirez did at age 35/36 back in 2008. (It’s important to keep in mind as you weigh Bosch’s credibility: he long denied any PED involvement, and changed his story after he was essentially paid handsomely by MLB. That doesn’t mean he’s lying, but it’s important background info.)

The ’60 Minutes’ piece also featured Commissioner Bud Selig and MLB Executive Rob Manfred laying out their position on the suspension, and it was quite clear that they felt Rodriguez deserved a harsh penalty. The MLBPA immediately took to arms about the duo appearing on the program, claiming that rushing to the media undermines the integrity and confidentiality of the Joint Drug Agreement. It added that legal options were being considered to address any breaches of the agreement.

After mulling the matter last night, I still don’t entirely understand what the MLBPA is so up in arms about. MLB aggressively pursued and suspended a player whom it believed had violated the agreed-upon anti-PED rules using an agreed-upon process and following an agreed-upon arbitration (with an agreed-upon arbitrator). The league’s position on Rodriguez was no secret, and Selig and Manfred spoke generally about their investigation, partially in response to public allegations by Rodriguez. I guess MLB going public with information about the investigation is probably the part that bothers the MLBPA so much, but that feels like a forest-for-the-trees problem. The players, like MLB, have an interest in ensuring that fans believe in the game and continue to be paying customers for years to come. And fans want to know what the deal was with Alex Rodriguez.

Is there a genuine concern that MLB will suddenly, on the back of the ARod success, begin witch hunts against players who aren’t guilty of cheating or otherwise violating the rules? The MLBPA’s anger certainly isn’t about protecting Rodriguez, specifically, who is now “convicted” of having taking a big PED-sized dump on his fellow players for much of his career. But Rodriguez’s is pretty clearly a unique case. What’s the genuine future concern here? (That’s not necessarily rhetorical. I’m open to thoughts on this.)

To me, this feels more like a leverage-grab in advance of the next round of CBA negotiations (the current deal expires in 2016, after the season). Everything is a negotiation, and, if the players want a higher share of the burgeoning MLB pie, they may as well start staking claim to various points of contention now. The game has enjoyed labor peace for almost 20 years now, and hopefully that will continue unabated. But we’ll see if more anticipatory disputes pop up over the course of the next couple of years. If so, fans could be in for an uncomfortable stretch.

And if we look back and see that the Alex Rodriguez case was the start of that process, I’m going to be pretty annoyed.