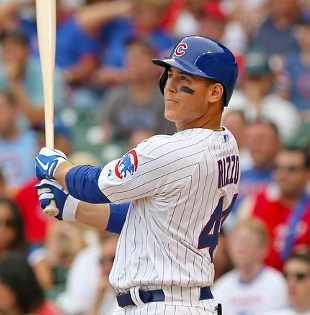 The ZiPS projections for the 2014 Chicago Cubs are finally out at FanGraphs. Although projections are always going to be hit and miss, they still provide an interesting perspective on how a team is shaping up on paper.

This year, ZiPS sees the Cubs as an approximately 78-win team, which is probably shocking to you, but that comes simply by adding up the WAR to a replacement level (48 wins) team. I suspect the range of wins using that system is probably pretty narrow. (And, I should add, the man behind the system, Dan Szymborski, advises against adding up the WAR to reach a win total. But, like, we all do it because it’s fun. Guilty!)

That said, ZiPS does appear to like the Cubs’ bullpen (3 wins total), the possibility of a rebound from Starlin Castro (3 wins), the center field and third base platoons (3 wins each), Anthony Rizzo (3 wins), and the catching tandem (3 wins). The rotation is fairly meh (ZiPS is not high on Jake Arrieta), though.

You should review the full set of projections for yourself – there are simply far too many to share here – but there are some interesting things to note: