A New Sponsor (and Pizza) at Wrigley Field: Giordano's Skip to content 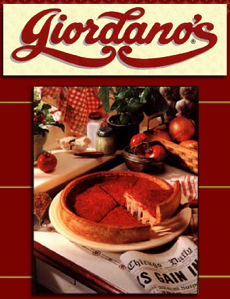 As part of the Wrigley Field renovation (expansion?) and development plan, the Chicago Cubs received permission to dramatically expand their use of advertising signage in and around Wrigley Field. And although the project is currently on hold, pending a resolution of the current rooftop drama, the Cubs are still getting to work securing long-term sponsorship relationships, tied to services in and around the ballpark, as well as some of that signage.

We’ve heard about a long-term deal with Anheuser-Busch, which will increase Budweiser’s visibility and availability in the park (including on the eventual right field sign), and the Cubs have reportedly inked at least one more new deal: Giordano’s.

The deal is reportedly set to be announced at the pizza company’s flagship restaurant today, featuring Tom Ricketts, according to Danny Ecker. Previously, the Cubs had a three-year agreement with D’Agostino’s Pizza, which recently expired. Now, Giordano’s will be the pizza of choice at Wrigley Field.

Ecker doesn’t yet have the terms of the deal, but hopefully it was the product of a massive pizza-related bidding war. Revenue is revenue, y’all.