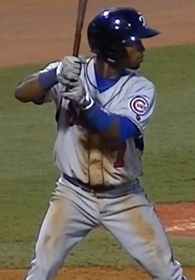 The accolades have been piling up for second baseman Arismendy Alcantara this winter, and deservedly so. Coming into the year, Alcantara was pretty well known to those who regularly follow the Cubs prospect scene, but he was not a player commonly discussed. Now, fresh off claiming a place on the MLB.com Top 100 list, Alcantara is rapidly on his way to becoming a household name.

Before we break his season down, though, we have to cover the series background. The goal here is not to re-rank the prospects (that comes soon) or to assess the strengths and weaknesses of farm as a whole (that also comes soon). The goal for this series is to take each prospect individually, study the progress made so far, and see what we can learn about the future for that player.

In any other farm system, and even with the Cubs in any other year, Alcantara would be the story of the season.  With the Cubs in 2013, though, he was somewhat left out of the spotlight.  Even though he was generally overshadowed by his second half double play partner, Alcantara had a very impressive season of his own and is worth some attention as he head into spring training.

There really is not much to criticize here. If you like old school counting stats, you’ll love the 15 homers and 31 steals out of a second baseman. If you like newer analysis, you’re dreaming on that 132 wRC+. The batting average crowd should be content with a .271 in the Southern League, and the OBP fans are loving his .352. Like power? He had an ISO of .180. Like speed? Those 31 steals came in just 37 tries. A fan of defense? Let me come back to that one.

And he played every inning of it in Double A. The jump to Double A is supposed to be the toughest in minors, but Alcantara pretty obviously had little trouble with it.

I should note that he was also learning a new position. He began the year as the primary shortstop for the Smokies, but once Javier Baez joined the roster, Alcantara became the primary second baseman. The transition from short to second is generally seen as a fairly easy one for most players, but the fact remains that Alcantara had a career year while in the middle of that transition and while facing the toughest competition of his life.

That’s a good year. Were it not for guys named Baez and Bryant, that’s arguably an organizational Player of the Year season. It easy to see why he was recently ranked the No. 4 second base prospect in all baseball.

And to top it off, he was young for Double A. Alcantara did not turn 22 until October.

I’ve watched Alcantara play both short and second, and to me he looks much more comfortable as a second baseman. At shortstop he seemed to rush a little more than he had to, and the result was a few too many errant throws and misplayed grounders. He still had his fair share of errors at second (13 in 64 games), but I did not see the same tendencies to play too fast. High error rates are normal for young infielders, and I think Alcantara will be no exception over the next two or three season. In time, though, I suspect he’ll emerge as a better than average second baseman.

With fellow infielders Castro and Baez ahead of him, it is entirely possible that this new position will be filled before Alcantara has a chance to claim it. If that happens the only other place that makes sense for Alcantara’s glove given the capabilities of his bat is center field. He has the speed and the arm to handle that position, but we don’t know how well he would read fly balls off the bat. It is possible that he’d be quite good in center, but for now that’s about the best we can say – that it is possible.

I suspect the outfield debate will prove nothing but an idle exercise, anyway. I think Alcantara has found his long term position at second base and that the Cubs will more than likely look to keep him there.

Alcantara will continue to be overshadowed by the bigger bats in the farm system, but I see this switch hitter as a potentially important part of the Cubs future success. While there are a lot of power bats coming up through the farm system, there is a lack of players with a high OBP. Doubles and home runs are great for a team to have, but they are even better when there is someone on base. Just ask the 2013 Cubs. That team was 8th in the league in team SLG, second in home runs, and third in doubles, but finished next to last in runs scored in large part because they finished next to last in team OBP.

Alcantara projects to be a solid OBP guy. Combine that tendency with his blend of power and speed and I think he could emerge as a 15 HR, 35 SB threat at the top of the Cubs lineup, with most of that damage coming from the left side of the plate against right handed pitching. He won’t be hitting those numbers in the majors in 2014, but after a year in Iowa I think he has a good chance to claim a slot atop the Cubs lineup for 2015.

Things to watch in 2014 in Iowa for Alcantara start with his defense at second. I think in time he’ll be just fine there, but it would be good to show some progress. I’ll also be looking to see if he can repeat something close to that career high 10.9% walk rate. That number is more than twice his previous career high, and that raises the possibility that it is simply an outlier and not representative of his skill set. If he can repeat that, or even post a BB% north of 8%, I’ll be a happy fan.

If all goes well, Alcantara has a chance to claim a position as part of the Cubs emerging young core. I like his chances.