The Chicago Cubs Are Worst in the World, Per Keith Olbermann Skip to content 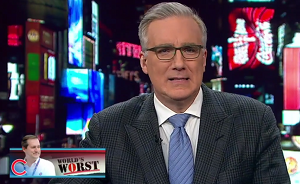 I’ve long passed the point where I have an opinion on Keith Olbermann. I kinda liked him on SportsCenter, and I occasionally find him sharp and on-point when he diverts from sports discussion. He just kind of exists, and I don’t think about him much.

And then he did this:

Watching Olbermann flail to recap the Cubs/rooftops situation while labeling the Cubs the “worst persons in the sports world” of the day yesterday, I can’t help but wonder: was he always this blowhard-y, and I just didn’t know any better, because I assumed he was better informed on the issue at-hand than I was?

Because now that he’s touched on something I tend to think I understand pretty well, he sounded like an SNL caricature of a talking head, speaking miles out of his depth. (Putting a video board up in Wrigley is equivalent to putting up a video board atop a pyramid in Giza – this is a thing he said.) He completed the caricature by reading recent statements by Cubs VP of Communications Julian Green in a mocking tone. Blowhard Pro-Tip: if you don’t have a good response for something, or don’t have the time to/interest in digging into the nuance, read someone’s statements in a way (complete with “humorous” inflection changes, and facial contortions) that implies that someone is an idiot. It’ll totally make *you* look like the smart guy!

Mostly I just don’t get what Olbermann was going for here. It appears that he was set off by what he perceived to be a renewed “threat to move” by the Cubs, and somehow worked backwards to make that into the Ricketts Family is dumb, the rooftops are great, Wrigley Field is perfect as is, and people come to Wrigley Field only to see Wrigley Field. I’m guessing it was simply designed to be the kind of low-hanging-fruit rant that gets attention (ta-da), but it’s quite a shame. On some of the substance, Olbermann and I actually agree – the implausibility/undesirability of the Cubs leaving Wrigley Field, for one – but that all gets lost in a morass of pomp and glib sound bytes.

Olbermann’s real crime? Choosing the Wrigley Field situation as the predicate to declaring them the worst persons in the sports world. There are so many better avenues, what with the recently awful stretch and the ugly projections for 2014.

… then again, I guess they’re not “the worst” in those respects! Thanks, Houston!