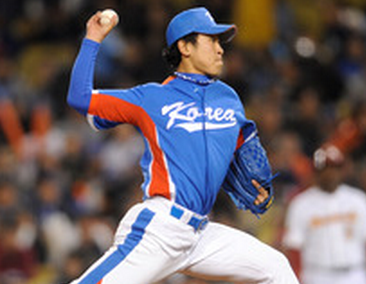 In yesterday morning’s discussion of Korean free agent Suk-Min Yoon, a 27-year-old righty who was great before 2013 (but battled a shoulder issue in 2013), there were multiple reports that the Chicago Cubs were among five or six teams still interested in signing the pitcher. As discussed, the Cubs were in on Yoon early in the offseason, but, after Yoon left the States without a deal in December, and after reportedly agreeing to terms with Jason Hammel, it was fair to wonder if the Cubs were legitimately still involved.

Two separate reports out of Texas indicate that, when Yoon threw for the Rangers yesterday in Arizona, he was also throwing for the Cubs, who had representatives in attendance. Evan Grant says that Yoon is expected to throw for other teams, and that a two to three-year deal is expected.

Although the Cubs may have legitimate interest in Yoon as a potential long-term asset – if you like a guy, and he happens to be a 27-year-old pitcher with upside who costs only money, you try and grab him regardless of your rotation situation – there are other teams that may have more pressing needs to add Yoon. The Rangers, with Derrek Holland out until the second half (and with an arguable need for another starting pitcher even before that), are just such a team. So, if the Rangers need Yoon, and view him as a potential long-term asset, then they may be willing to spend more than Yoon is worth to the Cubs, since they don’t have quite the same near-term need (it all goes back to those win curve and the value of a marginal win to different teams).

If the Cubs do add Yoon, it sure does make for an interesting situation, though. There are already seven legitimate starting options on the club – Samardzija/Jackson/Wood/Arrieta/Hammel/Villanueva/Rusin – and that’s without including, for example, a guy like Tsuyoshi Wada who has an outside chance of looking like a quality fifth starter in the Spring. Throw Yoon into the mix, and it gets tricky – and that’s not even considering the already well-oversubscribed bullpen.

Good problem to have, I suppose, and if Yoon’s price tag is in the two-years, $10 million range – the kind of contract even a currently-cost-conscious organization like the Cubs can work around if he flops – why not take a shot if your scouts are saying good things?

Although reports yesterday had Yoon close to signing – including from his agent, Scott Boras – T.R. Sullivan’s report indicates Yoon isn’t close to signing. I guess it depends on your definition of the word “close”. Pitchers and catchers start reporting next week, so I’d think both Yoon and the teams involved would like to know what’s what by the end of next week, if at all possible.