Is There Reason for Ryan Kalish Optimism? Skip to content 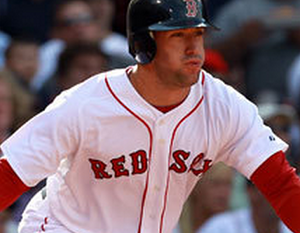 It tends to be the case that guys who come to camp on a minor league deal have reached that point in their careers for a reason. Flaws in their game have been exposed as they reached the majors, or maybe a serious injury or two derailed things. Finding a superstar on a no-risk minor league deal is not the kind of thing that happens, but, as we’ve seen repeatedly, you can definitely find some value out there when you’ve got the roster flexibility to take a bunch of shots, and if you luck into a guy with a unique set of circumstances.

Is Ryan Kalish going to be the next example?

I’ll confess, I didn’t have much optimism for Kalish when he was non-tendered by the Red Sox. I discussed him as a possible option for the Cubs, given the age (25) and the Boston connection (drafted in 2006 by, essentially, the Cubs front office), but I didn’t see much of a fit, given the lefty bat (the Cubs have a lot of ’em in the outfield) and the poor stats over the past few years. When the Cubs actually picked him up, I was similarly shoulder-shruggy.

Things were looking pretty darn good for his future, and there were projections/predictions from around baseball that, long-term, this kid was a future star.

Well, as Muskat’s piece describes, Kalish dove for a ball in April at AAA, and his shoulders were never the same. From there, his neck started bothering him, and things got worse over time. The reason Kalish missed all of 2013 is because, in January, he had shoulder surgery to repair a labrum tear, and then in August, he had a cervical fusion performed in his neck (the kind that you may have heard of Peyton Manning getting). For the first time in years, Kalish says he’s now fully healthy. Maybe there’s something there to dream on, once again?

To be clear: as much as injuries and surgeries can be used to explain a guy’s struggles, they are also clear warning signs about a guy’s ability to perform well in the future. That is to say, Kalish’s shoulder and neck issues could have been the reason for his aberrant poor performance in the last few years, but they could also wind up being the reason he never makes it back as a quality big leaguer. He’s also up against an extremely crowded outfield group of guys trying to make the Cubs’ roster – in addition to the four expected to make the team (Lake/Sweeney/Ruggiano/Schierholtz), other competitors for the outfield bench include Chris Coghlan, Mitch Maier, Darnell McDonald, Brett Jackson, Josh Vitters, Casper Wells, and Aaron Cunningham. The infield versatility of Donnie Murphy and Luis Valbuena could allow the Cubs to carry six outfielders (how about three outfield platoons at once!), but it’s a stretch.

In any event, given the track record, and the possibility of an explanation for the poor performance, Kalish is the kind of guy you’re happy to see the Cubs grabbing on a no-risk minor league deal. If nothing else, I’ll be observing him a little more closely in the Spring than I thought I would be.

Even if Kalish doesn’t make the big league team, hopefully he sticks around at AAA to start the year, and the Cubs can more closely see whether he’s back to his 2010 form. If so, at just 25, there might be a real future there for a lefty bat with great plate discipline, and one that can cover every spot in the outfield.