Justin Grimm: His Pitch Mix, His Role, and Flying Under the Radar in 2014 Skip to content 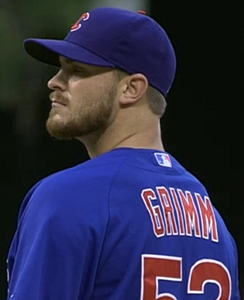 Justin Grimm went through both the highs and lows of being a big leaguer in 2013. The disappointment of not making the Texas Rangers major league roster out of spring training didn’t last long, as Grimm was called up to fill in for injured starter Matt Harrison on April 11th. As even Grimm admits, the timing may not have been the best for him, but the Rangers were battling numerous injuries in the rotation and Grimm was forced into duty.

“When I first came up, I may not have been truly ready, but I was able to compete at that level,” Grimm said. “I think I just proved that I can go up there and get outs when needed. [I was] probably rushed a little bit, but honestly I feel ready now, more than I ever have been. My confidence is high.”

While he may feel more prepared for the bigs now, Grimm’s confidence was likely soaring after his first month in the Rangers rotation. Grimm ended April with a five-hit, seven inning shutout of the Twins, giving him a 1.59 ERA in 17 innings for the month. His strong performance earned him AL Rookie of the Month honors for April, and Grimm seemed on his way to becoming another impressive talent developed by the Rangers system.

However, in early May, the Rangers came to Grimm and asked him to work on a cutter to add to his already solid three-pitch arsenal (fastball, change-up, curveball).

“I think it was the right call on needing that pitch, but personally, it was the wrong timing,” Grimm said. “It’s something you learn in the offseason, not during the middle of the season. You just got Rookie of the Month and all of a sudden they tell you need a new pitch. Sometimes you gotta back up to make yourself better and that was the case.”

Grimm, whom the Rangers moved to the Cubs last July as part of the Matt Garza trade, admitted it probably wasn’t best for his development to work on another pitch while facing major league hitters. But that’s the situation he was presented with, and he accepted the challenge. The cutter, which ended up turning into a slider, wasn’t nearly as effective in games as Grimm and the Rangers coaching staff had hoped.

“I threw it in the bullpen and yeah, it was nasty in the bullpen,” Grimm admitted. “But, obviously, it’s a lot different when you get out there in the game. And if you don’t have confidence in [the pitch], it affects everything else. I think that’s what helped lead to my inconsistencies, but you learn. That’s the main thing, I know what works for me and I think I know what’s going to keep me there and solidify a major league role this year.”

Not only did Grimm say he has finally developed confidence in his slider, but he added that his confidence in himself is at an all-time high. Grimm said he’s gone into this offseason with more purpose than ever before. In the past, when he lifted and threw during the winter, Grimm said it was just to stay in shape and keep his arm warm. This time it was different, as Grimm kept repeating that he went into each lift and throwing session with a ‘purpose’. A purpose of solidifying himself as a major league player.

“I’m going into spring training as confident as I’ve ever been,” Grimm claimed. “I’m ready to go in and compete – I’ve always been a competitor – but I’m ready to compete more now than ever. Going in with high confidence, just ready to go at people and show them what I got.”

With the addition of free agent Jason Hammel, the Cubs rotation looks pretty set to open the season, with Hammel and Jake Arrieta likely fitting in behind Jeff Samardzija, Travis Wood and Edwin Jackson. Of course, things can change quickly, with injuries, trades or any variety of spring training surprises throwing a wrench in the best laid plans.

Grimm said the Cubs told him to come into camp prepared to start, but he’s ready for anything.

“If they feel that I’m ready to stick at the big league and maybe a move to the bullpen will suffice for now, I told them I’d go either way,” Grimm said. “I think that’s one good thing about me, I can do both roles. I don’t mind doing that to be honest with you.”

Grimm’s stuff appears to play up when he’s working out of the bullpen. According to Brooks Baseball, Grimm’s fastball averaged 91.77 mph in all of 2013, but in his nine September innings, when he was pitching exclusively out of the bullpen for the Cubs, it ticked up to an average of 93.67 (a trend that bore out during Grimm’s limited time up with the Rangers in 2012 as well).

The Cubs’ focus this offseason has been on improving a struggling bullpen, and, with the additions of names like Wesley Wright and Jose Veras (as well as some interesting non-roster invites) to go along with impressive performances from Blake Parker and Hector Rondon in 2013, Grimm is even going overlooked as a possible pen piece.

“I’d like to go in [under the radar], nobody’s looking at me. I’d like to go in there and prove what I got,” Grimm said. “If [starting] doesn’t work out and they feel they’ve got it covered, there’s other spots to be won. For me, it’s just staying up [in the big leagues] all year. Whether it’s relieving, starting, closing, whatever it may be, just help get myself solidified in the big leagues.”

One never wants to place the “bullpen” label on a pitching prospect too early, and, at 25, it’d be a mistake to do that to Grimm at this point. Grimm certainly could be a strong contributor to the Cubs’ 2014 club out of the bullpen, and he’s made it clear that his goal for the season is to prove he belongs at the big league level permanently. However, for an organization that’s lacking in major league-ready, young, starting pitchers, it would be wise for the Cubs to not eliminate Grimm from their future rotation plans.

And if Grimm does happen to snag one of the final spots in the bullpen, he has no intention of giving up his hopes of someday being a starter.

“No, 100% not,” Grimm adamantly proclaimed when asked if pitching all of 2014 in the pen meant giving up starting. “The biggest thing for a starter is having more pitches you can throw for strikes. I think I can throw strikes with all four of my pitches. It’s just having conviction with those pitches when you throw them.”

Using a young prospect who profiles as a future starter out of the bullpen early in their career is certainly an effective method for preparing them for starter’s innings in the bigs – the Cardinals seem to be experts at doing so. The strategy makes the most sense when the prospect is being called up later in the season and can contribute to the major league club while also not being overworked after having logged starter innings in the minors.

However, Grimm’s case isn’t as simple. He already has over 100 innings in the big leagues (meaning mere exposure to facing big league hitting isn’t as pressing of an issue, especially if time in the minors can help him refine his slider), and logged 146 innings between both the majors and minors last season. It’s time for Grimm to try and increase his workload and get to the 180 inning mark, something that may not be possible at Wrigley. While that may not be the way Grimm hopes things plays out, it could be what makes the most sense for the Cubs, and what’s best for Grimm’s future.

In the end, Grimm’s future is tough to predict. His April gives hope that he could be a quality part of a starting rotation. His subsequent struggles are obviously of concern, but how much of it was truly related to the fact he was working on a new pitch while facing major league hitters? If it turns out that Grimm’s problems stemmed from an underdeveloped slider that he believes is now MLB-ready, then perhaps he could be a diamond in the rough for the Cubs.

The Garza trade netted the Cubs four players who could all impact the major league roster in the next two years, and Grimm has become an oft-overlooked piece of that move. If things go as he hopes, that won’t be the case come mid-summer.