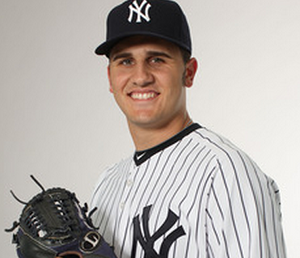 We may have just gotten the answer to the question of how the Cubs were going to open up a spot on the 40-man roster for recently-signed pitcher Jason Hammel. And it was a fairly predictable answer, if you’re a last-one-in-first-one-out kind of person.

The Cincinnati Reds have claimed pitcher Brett Marshall off of waivers from the Cubs, which brings the 40-man down to 39. Marshall was, himself, claimed by the Cubs earlier this offseason off of waivers from the Yankees. Given his youth and upside, it was a pure stash type of grab, and the Cubs probably hoped they would eventually be able to sneak Marshall through waivers so that they could put him at AAA Iowa, off of the 40-man. He got pretty far up the waiver chain, but unfortunately the Reds are going to take a chance. They may try the same maneuver at some point in the next few weeks.

This isn’t a huge loss for the Cubs, as they were not counting on Marshall in 2014, and there is already a glut of fringy pitching talent to sort out by Opening Day. Still, I did like Marshall’s upside, and it would have been nice to be able to stash him.